Carnations are one of my favorite flowers and it is also one of the most powerful magickal natural ingredients we can use for some magickal rituals. Let us learn all we need to know about the beautiful and powerful carnation magical properties and uses.

First of all, what is a Carnation?

A carnation is a flower belonging to the family Cariofiláceas, whose scientific name is Dianthus caryophyllus. 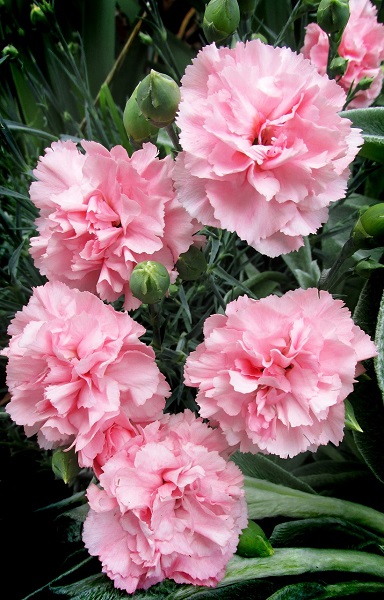 Its name comes from ancient Greece, and it was Theophrastus a Greek philosopher and scientist of the time, who gave it the name Dianthus, a word made up of the words Dia which means God, and anthos which means flower.

Thanks to their beauty, carnations were known as “flowers of God”. The Mediterranean is thought to be the area of origin for carnations, although this flower is found almost everywhere in the world, and there are records of its cultivation from thousands of years ago.

The properties of the carnation in magick and protection are many and ancient, and for a long time, it has been considered a protective magick plant.

It is believed that red carnations when planted in a garden, will repel bad energy from the house.

In the past, witches were so convinced of its power that they used carnations to avoid death at the stake, and similarly, they used it in many rituals and spells, something that continues today.

The properties of the carnation in white magick also include regaining strength, aiding with healing, and it was used in sacred rituals.

To ensure the magickal power of the carnation, it must be planted during the first quarter of the moon, to obtain the most powerful flowers.

Old origins of its magickal uses and properties

Being present in Europe for millennia, the carnation is one of the richest flowers in history, legends, and mythology. It is the sacred flower of the goddess of hunters, Diana.

According to legend, it is said that a young shepherd fell madly in love with Diana, who, had made the vow of virginity, but after giving him false hopes of love, abandoned him. The young man died of despair shortly afterward and white carnations arose from the tears he had shed for his love.

Carnations are also present in the Christian tradition, it is said that at the sight of Jesus on the cross, the sorrowful Mary, standing before the cross, those white carnations grew from where her tears had touched the ground.

However, not only mythological legends are linked to the carnation, but also in history there are many stories related to this extraordinary flower. It is said that when Marie Antoinette, during the French Revolution was imprisoned, she continued to receive messages that were delivered to her after they were carefully rolled them up in carnation bouquets.

Furthermore, during the nineteenth century in France, the red carnation became the symbol that Napoleon used to decorate the ribbons of the Legion of Honor, and it was worn in the buttonhole of nobles who were to be guillotined, during that same period the white carnation was the floral symbol of the monarchy.

In the second half of the nineteenth century, however, the red carnation became the symbol of the socialist movement.

In the language of flowers and plants, the carnation generically symbolizes virtue and nobility, but each color has a specific meaning, such as with any flower of great beauty, the carnation is full of meanings and symbols, depending on the color of the carnation, it may symbolize different things, but in general terms, carnations are representative of beauty and pride.

My favorite spells and rituals using a carnation

With a Custom White Magic Spell Casting I can cast a powerful Forgiveness Spell in less than 24h.

Click on a button below, if you’re interested in hiring me to do the casting for you.

To eliminate negative energies and make way for all that is good, perform this ritual.

Put all the ingredients in the container with the water and leave everything outside overnight. In the morning use the water to bathe yourself.

You can find other cleansing rituals here.

To improve your financial situation

This ritual should be performed on a crescent moon, preferably on a Sunday, and when you still have a little money in your possession.

You can read more about how I work as a money spell caster here.

Put the candle on the mat and write a petition to improve your financial situation on the piece of paper. Fold the paper into a small ball and place it between the carnation petals. Place the plate with the honey in front of the candle, and carefully drop the carnation onto the honey.

Light the candle every day for a week starting on Sunday. Doing this will make the spell be fulfilled.

This spell will help you strengthen your love for your partner.

I can cast a love strengthening spell for you in less than 24h.

Write the following on the paper:

‘With this tie, I will attract my loved one in every possible way, he/she is my soul mate, he/she is my perfect partner, he/she is the reason for my life to me, I hope it will always be this way’

Fold the paper four times, place it in the center of the silk/cloth circle, next to the leaves and petals. Then tie the fabric with the ribbon, creating a bag. Tie the ribbon seven times and repeat aloud what you wrote on the paper, once for each of the knots.

Then you must carry the bag with you for twenty-four hours and sleep with it under your pillow.

You can also read more about the most powerful herbs for love spells here.

This ritual must be performed during the full moon.

Place the candles around the plate in an equilateral triangle (equal distances apart). Surround the candles with the jasmine, carnations, and orange blossoms. Then light the incense and repeat the following phrase:

“My beloved Universe, I want you to always make (say your name and that of the person) find moments of happiness together. May our union be authentic and deep.”

Repeat the spell seven times, place the photo of the person you want on the plate until the candles burn out.

Immediately pick up the flowers and the wax that remains with your right hand, and clean the plate with your left.

Keep the photo in a safe place and put the remains on the paper before throwing it away.

You can also read more about the most powerful herbs for sex magick here.

Carnations are beautiful and powerful flowers that you can use to beautify your home, improve your health, and perform rituals beneficial to you. Take advantage of these beautiful creations of nature.