An apple tree is the oldest cultivated tree in Europe, however today, we’ll learn more about its symbolism and meaning in different cultures.

An apple tree (Malus domestica) is a plant part of Rosaceae’s botanical family. Among the cultivated fruit trees, it is one of the most common. It reaches a height between 16 – 40 feet (5 and 12 meters), its foliage is expanded and dense and the roots are superficial.

The leaves are alternate and oval, slightly indented. They are smooth on the upper face and slightly tomentose on the lower. It blossoms are pinkish-white in color, have 5 petals, and are gathered in corymbose inflorescences. 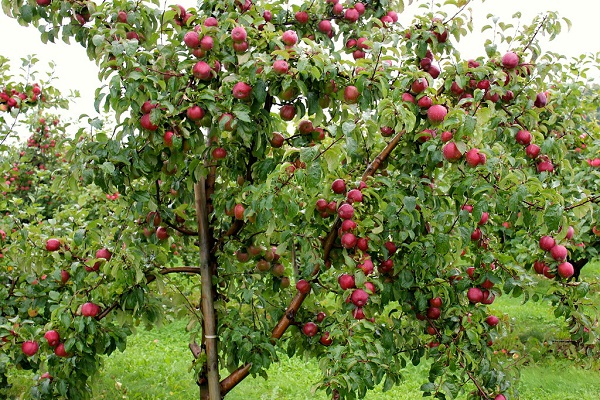 The plant sprouts and blooms in the spring. The fruit (pommel) is globular, first green in color and, when ripe, can turn yellow or red, with intermediate shades, depending on the variety.

However, some of them remain green although they are ripe. The plant is native to a southern part of the Caucasus and in Europe, it is widely cultivated in our country and in France.

Origins of an apple tree

Its fruit has been known practically forever: just think of Adam and Eve in the Earthly Paradise, but also of ancient Greece, before the Trojan War, when the three goddesses of Olympus, Hera, Athena, and Aphrodite, instruct Paris to choose the most beautiful among them, to assign her the golden apple.

This tree also plays a leading role in history, particularly in Celtic culture, according to which every tree that lives on earth performs a double function: on the one hand it is an emblem of magical powers, on the other, it is a home for the fairies that populate the woods and forests.

The symbolism of an apple tree is very rich. Starting from Greek mythology, there is an apple of discord and the golden apples of the Garden of the Hesperides. The latter are daughters of Atlas and Hesperides and lived in a garden in which apple trees with golden fruit grew. The entrance to the garden was guarded by a dragon, who was killed by Hercules, who plundered all the wealth.

Paris decided which of the goddesses was the most beautiful between Aphrodite, Hera, and Athena by giving her a golden apple. And this was the beginning of the Trojan war.

Unlike what is believed, an apple is not the fruit eaten by Eve in Eden; the Bible does not specify which was the fruit of sin. It was medieval iconology that associated the apple with original sin.

In Celtic mythology, Conle, son of King Conn of the Hundred Battles, receives from the Lady of the Other World an apple that feeds him for a month without ever being consumed.

In Breton mythology, an apple is eaten before prophesying. It is a magical tree from beyond the world; it grows in Avalon, the mythical world where heroes rest. The greatest druid of antiquity, Merlin, held his magic lessons under an apple tree.

In China, the blossom is sometimes used as a sign of mourning to symbolize the transience of life, since it is very ephemeral and delicate.

Through numerous myths and legends of different cultures and ages, a tree and its fruit are the representation of the archetype of the Great Mother and her triple aspects of Virgin, Mother, and Elder; the apple also represents the melting point of matter and sky and an apple is the celebration of this union.

Because of its spherical shape and the presence within it of the seeds of life, the apple symbolized the cosmos and imperial power; in public appearances, the emperors of the Holy Roman Empire held a scepter with their right hand and a golden apple with their left, an allegory of power. This fruit is also considered the image of the world.

In Baltic mythology, an apple is the symbol of the setting sun and one of the incarnations of the goddess Saule. In the Jewish tradition, during Rosh Hashanah, slices of apples dipped in honey are eaten, to ensure the prosperity of the new year.

What does an apple tree mean spiritually?

An apple can be considered a universal metaphor for giving and receiving love, even from a physical point of view. The pommel is a symbol of sensual love, of the marriage that is consumed, of beauty, youth, and fertility; in addition, at weddings, it is part of the gifts that adorn the table set for the occasion.

On a spiritual level, however, we can say that an apple comes to represent the power of love, devotion to the gods, overcoming duality, and communion with the gods. In other words, our human love, even in its sensual expression, is a model for the union between a single individual and the divine.

An apple is the fruit of the tree of life, but also that of knowledge, good and evil. If cut perpendicular to the axis of the peduncle, it shows a pentacle enclosed in a circle, a symbol of the manmade who is at the center of the universe, matter and spirit, a five-pointed star symbol of knowledge.

Still today, an apple is of fundamental importance at certain times of the year, especially at Samhain, since it is offered to those who live between the worlds and to the spirits of the dead who join us on that occasion.