In practically all cultures there are symbols of luck or deterrents of bad luck. These types of beliefs or superstitions make us feel safe and protected.

Let’s find out more about the green evil eye amulet.

If you are wondering what a Green Turk’s eye or the green evil eye is, it is an amulet used in different cultures to ward off bad luck or protect its owner or a specific place.

It is also very popular in Greece, known as the Greek eye, and is used as protection against envy and similar negative feelings.

The eye symbol is generally associated with the sun and light, which is why different types of amulets have been used throughout history, including the Turk’s eye, to avoid evils and diseases. 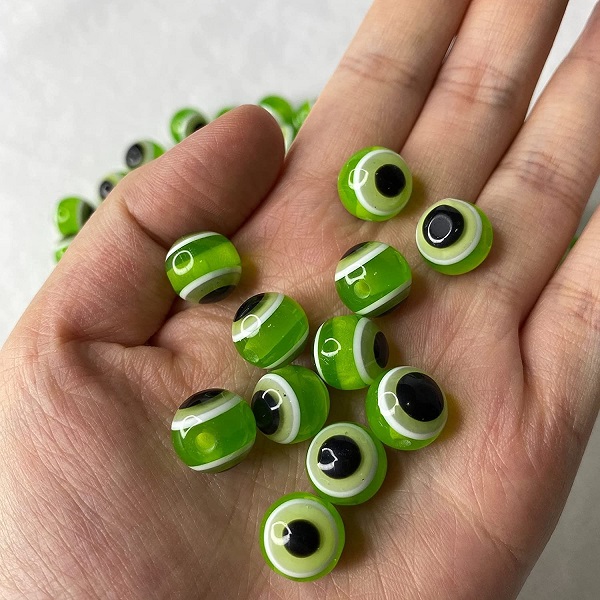 The hand of Fatima or the horseshoes of good luck are some of the protective symbols that contain the green evil eye.

The Turk’s eye achieves its goal by “distracting” the person’s gaze, so the person who is wearing the amulet is protected from the negativity transmitted in the gaze.

Why should we prevent the evil eye?

The evil eye is an evil power that can affect any one of us. It is usually caused by people with dark souls and negative energies; the bad wishes of this person are transmitted to another through an evil gaze. You simply need to stare at your target and think negative things to cause the curse and the victim can suffer from negative effects after the attack.

The eyes are the most important part of the body since they are the portal to the soul and to our hearts. Therefore, the evil eye is provoked through the eyes while the provocateur stares at their target. All this can be avoided by using a sacred talisman, prayers, rituals, or ancestral sessions with spiritualists.

The most popular amulet in Europe and Asia is the green evil eye, it has been around for centuries and is well-known throughout both continents. It should be noted that after the discovery of this amulet, many decided to create other holy talismans, but they could not emulate the power of the green evil eye.

Despite how there are many methods to remove and avoid curses, people prefer protection with amulets.

It is important to note that many people have mystical objects in their rooms and tend to think they are simply decorations. This is the wrong idea, having powerful objects is of great importance, especially in our homes. We should keep several charms and display them throughout the house to ensure absolute protection.

Other ways you can use it for

It is used to guard against the negative influences of envy and the evil eye affecting your spirituality, your inner stability, and balance. Consequently, people commonly wear it on necklaces, bracelets, rings, and other accessories.

The green Turk’s eye is an eye with its fixed gaze that rejects any negative energy that wants to attack a person. This eye works only if it is consecrated; otherwise, it would be nothing more than an object. The consecration process is explained down below.

Once we learn about the history of the green evil eye, we can better understand its practices and rituals.

Origin of the green evil eye

Long ago, in Egypt and Babylon, the green eye appeared for the first time. It was believed that people had a mystical power that they transmitted only with the power of their gaze. This consisted of evil feelings, thoughts, and desires of human beings that could be manifested through the eyes.

Later, it spread to multiple countries on the European continent and then spread even further in Asia. Consequently, the history of the evil eye has been passed down from generation to generation. This amulet was mostly used in Turkey and Greece, and it was normal for people to use it to deflect evil.

Interestingly, the belief of the evil eye was around for thousands of years before the advent of Christ.

In the modern era, the green evil eye is an amulet used worldwide because its mystical structure repels negative vibes. In addition, it is a symbol of protection because it eradicates the evil eye in adults and children. Also, it is widely used in homes for protection and in turn for decoration simply for fashion.

You can usually get them in various colors, which serve different purposes. Also, they have celestial meanings that protect by releasing positive energies in the day-to-day life of the people who usually use them. These energies are affiliated with feelings such as love, hope, truth, passion, and vitality. 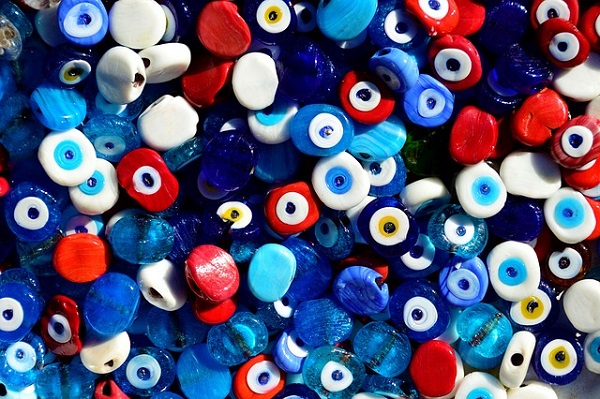 How should I wear it?

You simply have to place your Turk’s eye on a chain to wear as a pendant. You can also wear it as a bracelet or gift it to someone else for them to wear.

It can also be hung around the house to protect it from the negative effects of the evil eye.

If you need to protect a baby, simply attach it to the baby’s clothes or on its wrist.

Newborns are said to be much more vulnerable to the evil eye because they don’t yet have the energy to fight it.

What do I need to consecrate it?</h3

So, to consecrate the amulet, you need 4 white candles, incense (such as sandalwood), holy water, salts, earth, rue essence, and matches.

Finally, with all the elements, start the ritual on a night with a full moon and proceed to activate the eye.

How to activate it?

With the candle and incense lit, open the circle.

Face East and pass the amulet over the incense.

“Oh ancient gods of air, all you creatures of the elements and all you spirits of the east, I ask you to charge this amulet with the mystical energy of the air and with your divine light.”

Then turn to the South and pass the amulet over the fire three times, saying:

“Oh ancient gods of fire, all you creatures of the elements and all you spirits of the south, I ask you to charge this amulet with the energy of the sacred flame and your divine light.”

Then turn to the West and pour the water 3 times on the amulet, repeating:

“Oh ancient gods of water, all you creatures of the elements and all you spirits of the west, I ask you to charge this amulet with the vital energy of the source of life and your divine light.”

Finally, turn towards the North and pass the amulet through the salt three times, saying”

“Oh ancient gods of the earth, all you creatures of the elements and all you spirits of the north, I ask you to charge this amulet with living energy and your divine light.”

As you finish, say:

“I consecrated this amulet to the 4 elements, now let it protect me and help me remain my own.” Hold the amulet in your hands and hold it above your head. Finally, say three times: “So be it.”

It is a fairly long but effective procedure because as you have read, all four elements work together to consecrate your amulet so it is strong and able to protect you.

Prayer to enhance its power

The objective of this prayer is to eliminate and eradicate the evil eye, in turn, all the damage it causes.

You can cast it on yourself or on someone else who you suspect has been inflicted by the evil eye. To carry out this prayer, I recommend that you are with the affected person.

Also, keep in mind that children and infants are more susceptible to the effects of the evil eye. If you know an adult suffering from this curse, you may find that the children in their life are suffering from it too.

This is in order to remove the evil eye once and for all, without leaving any residue. In this way, the victim of the curse will not be affected again but will be able to fully recover.

This is a simple prayer for eliminating the evil eye. Many people say that the results of prayers are satisfactory and others simply prefer to use green evil eye charms. Both methods offer great results to eliminate this evil, so what you choose to do depends entirely on your personal tastes.

Many people believe that prayers offer better results when there are medicinal plants around the place where they are performed. This is because plants act as spirit helpers to completely release all malicious waste.

In conclusion, if you are a person devoted to prayers, this method is ideal for you, it would remove it from your soul. If you prefer beliefs in talismans and powerful mystical objects, the amulet can greatly help you to purify your spiritual energy.

What if it breaks?

Tradition says that Turk’s eyes break once they have absorbed energy from the evil eye, hence fulfilling their duty to protect you. Once your amulet breaks, it must be replaced by another amulet. If it has simply been cracked, the energies of the Turk’s eye can be charged to ward off bad energies with a cleaning with water, earth, amethyst, or a mental cleaning.

Where to buy a green evil eye?

You can buy it in either a physical or an online store but be careful! You need to buy an original, traditional green evil eye so it can fully and completely protect you. If you can, try to buy it in a local Turkish or Greek store so you know it is genuine.