The most powerful good luck charms are objects that protect their wearer from bad luck, from evil spirits or strange influences such as the evil eye.

They are usually physical objects, generally in the form of a pendant or bracelet, although a written text and even a phrase said aloud, also serves as a lucky charm.

They can also be an object with a special meaning for those who carry it, for example, something that has been given to you by someone who has good wishes towards you or something that someone with whom you held in high esteem.

These charms have power by themselves, and it is not necessary to activate them through a third person, as in the case of talismans, which require the action of an intermediary or shaman.

The power of these charms is not related to the cost of it or the material it they made of. Thus, a lucky charm made of wood can be as effective as another made in ivory.

The Origin of Lucky Charms

The origin of lucky amulets dates back to the Neolithic when the primitive hunters and gatherers collected shiny stones with unusual shapes and took them with them to bring them a bit of good luck.

The first lucky amulets in the form of a jewel go back to the Egypt of the pharaohs, almost 5,000 years ago. These objects not only brought good luck and protected their bearer, but they also identified him after death and served for the gods to guide him to his rightful place in the afterlife.

The Greeks and Romans also had much faith in these unique charms. Each god of the Roman pantheon was associated with a precious stone, from which pendants or figurines were made that transmitted the powers of the god corresponding to its bearer and brought good luck. A small box was also hung around the neck where the Romans kept sacred texts, believing that if they kept it close to the heart, the body would absorb the contents.

The first Christians carried under their clothes a lucky amulet in the shape of a fish, called Ichthys, seeking divine protection (below we explain the meaning of this symbol). 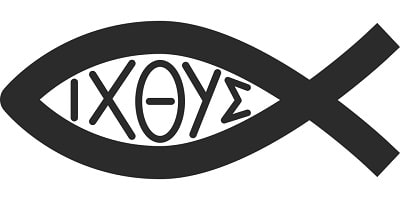 At the same time, the Jews carried as a lucky charm a gold pendant containing fragments of the Torah.

Later, the Arabs would do something similar, but with fragments of the Qur’an. In the middle ages, knights wore lucky charms that, along with spells and spells, protected them in battle.

In the nineteenth century, lucky charms, besides being magical objects, have an aesthetic purpose; hence the designs were increasingly elaborate.

Also read:
How to Find a Good Luck Charm? [The Most Powerful Ones]

11 Most Powerful Good Luck Charms That You Can Buy

These are the most popular lucky amulets and the meaning of each of them:

Tradition says that when Eva left paradise, she took with her a four-leaf clover as a souvenir.

Also read:
Why is Four Leaf Clover Lucky? [Symbolism Behind It Explained]

A horseshoe is a lucky charm trendy in Western culture.

The origin of this belief is in the times when the post delivered letters with horses. The arrival of a letter meant having news of the loved ones. Read more about love charms here.

The horseshoe as a lucky charm moves away evils and prevents the devil from entering the house; that’s why people nail a horseshoe on the doorway to the house. The horseshoe should be placed with the tips upwards, to accumulate good luck, although some believe that if they point down, the horseshoe spills good luck on those who live in the house.

The Tree of Life

The tree of life is a source of knowledge and symbolizes several things: the vital breath, the food so necessary for life and the connection between this life and the next.

In turn, each of the different parts of the tree of life symbolizes something different.

In the Buddhist tradition, the tree of life is also the tree under which Buddha attained enlightenment (bodhi), a religious ficus.

Carrying the tree of life as a lucky charm gives you the strength to achieve success in your personal and professional life and to face the difficulties of everyday life.

The Turkish eye, in Arabic nazar, is an amulet against the evil eye that has its origin in the Phoenicians.

The first reference to the evil eye appears about 5,000 years ago in Mesopotamia, although it seems that this belief already existed in the Paleolithic.

It is a curse caused by someone’s evil gaze, usually motivated by envy, which brings bad luck and causes misfortune. The one who receives the curse is generally not aware that it has been thrown at him/her, so it is necessary to carry a charm like this one is.

The infinity knot is a symbol that comes from Tibetan Buddhism, although it is also found in Celtic or Chinese culture.

The origin of this symbol seems to be in the representation of the serpent, a symbol of duality in many cultures.

Without beginning or end, the infinite knot is an intricate design of lines that cross to form a beautiful pattern of ties.

The infinity knot means the connection between the spiritual and the earthly. It also symbolizes the interconnection of all beings that inhabit this planet and represents the unity of the universe.

Om is the most sacred mantra, both in Buddhism and in Hinduism, the sonorous form of our divine self (atman), that is why all mantras begin with the word Om.

Represents the universe (Brahman) and chanting the mantra Om during meditation symbolizes the bond that unites us with the universal, harmony with all that surrounds us and the union of the physical with the spiritual.

Carrying the Om mantra as a lucky charm transmits us the cosmic energy of the universe.

The Ying and the Yang

Ying and yang represent the positive and the negative, day and night.

They express how opposing forces can be complementary, lean on each other to form a perfect unity like the circle.

Carrying as a lucky charm the Ying and yang allows you to understand that there is no night without day, evil without good and helps you to endure with patience those painful moments of life waiting for luck to change and that life will smile again.

The Flower of Life

The flower of life is a hexagonal geometrical pattern composed of many overlapping circles to form a flower-like design.

In the center of each circle is in the circumference of the six circles that surround it, until forming a total of 19 total and 36 partial circles, all surrounded by a large circle.

The perfection of proportions and the harmony of the flower of life has been known since antiquity and is found in numerous artistic manifestations.

The flower of life has a spiritual meaning and is the visual expression that the lives of all beings that inhabit the earth are interconnected. It also represents the fundamental form of space and time.

Besides, it is part of the sacred geometry and contains an akashic record with basic information about all living beings.

The Hand of Fatima or Hamsa

The first to use this symbol to bring good luck were the Phoenicians, who took it to the length and breadth of the Mediterranean.

Originally it represented the goddess Tanit, patron of the city of Carthage, who had power over the lunar cycle.

Over time, it became just an amulet to bring good luck and, especially, to protect from evil eye whoever wears it.

The use of this symbol as a lucky charm extended to the Sephardic Jews of the peninsula, who called it Jamsa, Hamsa or Miriam’s hand, in honor of the sister of Moses and Aaron.

For the Jews, the Jamsa represents the Pentateuch, which are the five books of the Bible that form the Torah (Genesis, Exodus, Leviticus, Numbers, and Deuteronomy).

With the expulsion of the Jews to North Africa, this amulet of luck spread to the Muslim world.

In this case, it is known as Khamsa or the hand of Fatima, in honor of the daughter of the Prophet Muhammad. For Muslims, it represents the five pillars of Islam.

Nowadays, the use of the Hamsa as a good luck charm and to protect oneself from the evil eye is widespread throughout the world.

The eye that appears in the center represents the divine providence, the eye that sees everything.

Carrying Fatima’s hand as a lucky charm brings good luck and protects you from the evil eye.

The elephant is an animal especially revered in India and symbolizes qualities such as wisdom, strength, courage, longevity, patience, and honor. The elephant also symbolizes royalty.
The god Ganesha (who has the body of a man and the head of an elephant) is one of the most important of the Hindu tradition and embodies wisdom.

The word mandala is of Sanskrit origin and literally means circle. Although within a mandala there may be squares or triangles, the mandala always has a circular nature.
A mandala is a spiritual symbol in Buddhism and Hinduism and represents the order of the cosmos, harmony, and unity of all things.

The mandalas remind us of the relationship we have with the infinite and help us to transcend beyond ourselves.

In Tibetan Buddhism, a mandala is a tool that guides us in our spiritual journey, which is why the monks devote many hours to elaborate complicated mandalas with the earth of different colors, which they then destroy to symbolize the ephemeral nature of life.

The famous Swiss psychiatrist Carl Jung used the mandalas for the diagnosis and treatment of his patients due to its hypnotic properties, which allowed him to enter areas of the subconscious.
The concentric structure of the mandala occurs in many aspects of life. Things like planets spinning around the sun, flowers, or snowflake are shaped like a mandala.

These are some of the most powerful lucky charms for good luck. Choose your own and remember always to respect it and meditate on it to recharge it with positive intention to fulfill all your goals and have a prosperous, wealthy happy life.

Most Powerful Wiccan Love Symbols [And How To Use Them]
A List of Powerful Love Charms [& What do They Symbolize]
10 Powerful Ancient Protection Symbols [Historical Meanings]
Here's How to Make a Charm Bag [a DIY Guide]
Where Did the Evil Eye Originate? [History & Beliefs]
Most Powerful Wiccan Necklaces for Protection [Explained]
What do you do with a Four-Leaf Clover if you find it? [Explained]
How to Make a Talisman for Luck? [Explained In 6 Steps]