Wiccan love symbols are amazing ancient symbols that attract love into your life and can be used as a spells and rituals tool.

I want to share with you the most powerul symbols are and how they work. Let’s begin!

What are Wiccan love symbols?

Wiccan and Pagan symbols are useful for providing a graphic representation for protection, energy, power, divinity, seasons, physical objects, and human frailties and strengths. These Wiccan symbols and other Pagan signs are used in ceremonies, for spells, or in some writings.

How do they work?

A Wiccan love symbol works only if the observer activates its emotional structure. The sun is the sun in every moment of the day, but at the very moment when an individual places his attention on it, he is overwhelmed by an emotion that transforms it into a symbol capable of transforming a certain reality into an emotional reality. If you see it from a brand-new perspective, with an open heart and an open mind you will definitely be able to use its energy and attract what you want in your life.

What can I do with them?

You can use them the same way you use sigils as a way to state to the universe what you want. So, it can be a tool you can use during spell casting and rituals and wear to attract that kind of energy and let the universe send that flow of loving energy your way.

Also called triskelion or triskellion (from the Greek for “three legs”) it is the best-known Celtic symbol. It embodies the power of the number Three.

If, starting from the center of the symbol, the three spirals that form it wind around themselves from right to left, it represents the swirling of energies from the inside out, the manifestation; if instead, they develop from left to right, it symbolizes descending into the underworld (from the Latin in-fero, meaning “what is carried within”).

It has several meanings and represents:

Being a sign of eternal forces, of the mother and all her representations, and an icon of all the elements in one, it is one of the most powerful Wiccan love symbols. 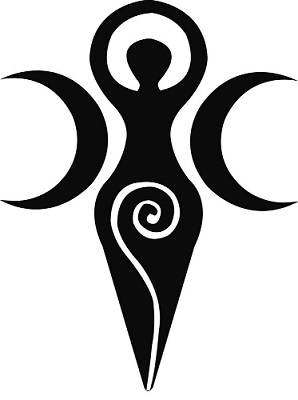 Since it is nature, the whole nature, in her there is both the Temptress and the Old Woman, the cradle and the grave.

It gives fertility, love, and abundance even if it has its dark side at the same time. It is the moon and the silent sea, embodiment of fertility and love.

The symbols to honor it are; the cauldron, the cup, the labrys, five-petal flowers, the mirror, necklaces, shells, pearls, silver, emeralds, etc…

It is also called Goddess Trina (linked to the phases of the moon); it is very closely linked to the new moon and freshness (in the appearance of a girl); the full moon, motherhood, and childbirth (as the mother); and to the waning moon with wisdom, a prophetic spirit, magic, destruction, and punishment.

The Goddess possesses an obscure role which is evident from nature itself.

During the practices, we must see the Goddess as something that brings us spiritual relief, hope, and love.

Pentacle (and its variations)

In traditional magic, the pentacle conveys power, happiness, and love. It symbolizes that energy capable of dominating elementary powers and attractions.

In esotericism, it represents a star that possesses secret forces that can be used to achieve one’s goals and fulfill wishes.

In occultism and in Freemasonry, it is considered the most powerful method for evoking spirits; it is used in ritual magic and sometimes even in divination.

The star positioned with the tip pointing upwards is considered as the sign of good and an instrument to evoke benevolent spirits.

Tradition has it that for Satanists, the star has the tip down and two more at the top; thus, it would become the symbol of evil, of Satan, and would be used to evoke evil powers. But in reality, those who turn their lives towards negativity need neither pentacles nor Satan; it would be enough to look around and be satisfied in the search!

There are various types of pentacles, more or less elaborate. Some are to be used exclusively for ceremonies, others to be put on the altar, or to be worn.

We witches have the custom of wearing it around the neck as protection and as a symbol; it is mainly made of silver (metal linked to the moon and therefore sacred to the Goddess).

I have more than one scattered around the house, and even in the car, hanging on the mirror. The uses are many, for protection, invocation, and consecration. Positioned on the altar, it concentrates the energies of the five elements inside, allowing you to load the objects that are placed on it.

During ceremonies, the priestess traces it in the air with incense, Athame, or even with a wand. This is used for the invocation of the elements; in fact, in the Wicca tradition, in interacting with the elements, one is represented by each tip.

The traditional position of the elements on the Pentacle is as follows:

1) The pentacle, and the circle that encloses it, are two symbols of infinity, as they do not have a starting and ending point; for this reason, they represent the flow of cosmic energy.
But you need to know something about the pentacle, whether you use it as a symbol worn on the neck as a sign of devotion of your faith, or as an instrument on the altar, it is the position in which you put it that makes the difference.

3) If you use it upside down, the Pentacle is NOT a satanic symbol and therefore does not attract negative energies. Overturned it has different energies, suitable for different and more materialistic purposes. I never use the inverted pentacle and not because I think it is diabolical, but because I prefer to have ‘self’ control over the elements and all that is in my path.

4) In rituals, it is traced at the beginning of the ceremony by addressing the four cardinal points (north, east, west, and south) with an incense stick, with your fingers, or with the Athame to “open the portals” from which the guardians of the elements will come into our circle for protection during the celebration. Remember that when you have finished the ceremony, repeat it to thank them and close the portals.

When you find a heart with a pentacle inside, it’s all about gathering all the elements and the energy towards love. But if the upright pentacle is all about emotions and feelings, the upside-down pentacle is more about the material world, like physical attraction, obsession, sex, and so on.