How to Remove Bad Omen from Home? [Powerful Methods]

According to some theories, which have their roots in the mists of time, magical rites and superstitious practices are gestures to which a positive effect is attributed. You may not be the most superstitious person, but if a mirror is broken, salt is spilled, or a black cat is seen crossing our path, you may have think about the possible misfortune.

Beliefs and superstitions have always helped us to live, they are our “superpowers” with which we delude ourselves that we have more control than we do. They allow us to think that there is something predictable in life, that there is a hidden meaning in things, in events, and in their succession.

Against bad omens and bad luck you must always be prepared (don’t open umbrellas at home, beware of salt, and don’t overturn bread).

Here is a handbook of “magic rites” useful to keep bad luck away you’re your home. If you are superstitious, let’s see how to know that you have bad luck in your house and how to remove bad omens from your home.

A few bad omens that can usually be found at home

Never sleep in front of a mirror

In many cultures, the mirror represents a window to the afterlife. If your bed is in front of the mirror, move it. According to some traditions, it is dangerous because, while dreaming, the soul leaves the body, enters the mirror, and can’t find its way back. Furthermore, breaking it heralds seven years of trouble.

American tradition holds that an old broom can carry all the negative energy from your previous home into your new home. Not only this, but it seems that touching an unmarried woman’s feet with a broom will condemn the young woman to remain a spinster forever.

The umbrella even at the time of the ancient Romans had a double use: it protected from the rain, but also from the sun. Since the sun is a pagan deity, therefore, opening this instrument at home was considered an offense to the sun god, who would have thrown negative influences against the protagonist of the gesture.

In the Middle Ages, when priests went to homes to carry out extreme unction to the sick, they used to open a black umbrella over the heads of the sick. For this reason, it began to be associated with death and mourning.

Do not turn over bread

This is always recommended by grandparents. Placing the curved part of the loaf on the table brings bad luck.

Various very ancient superstitions are linked to a bed. One of these is not to make a bed in three, as it means the death of the youngest person. In fact, this superstition arose from the desire to save manpower. Another well-known belief is that of not sleeping with your feet facing the door, as it is recognized as a position for carrying away the dead.

Getting off the left side of a bed would also not be recommended, as it is considered the side of Satan. Even placing objects such as a hat or shoes on a bed is not a good omen.

In fact, according to popular superstitions, putting a hat on the bed would imply an omen of death in the family, as this was an accessory that was placed on a bed during extreme anointing, as well as shoes that would come into contact with a bed only at the point of death.

In some traditions, it is said that it is bad luck to hold it with the left hand. But a spoon can also be a harbinger of good luck: in Northern Europe, it is believed that two spoons placed near a plate with the concave side facing downwards indicate an imminent marriage.

Salt at the table

Salt was once a symbol of friendship, to the point that a bowl of salt was placed in front of guests. It seems that one day a guest inadvertently dropped the bowl on the table, arousing the ire of the landlord who unsheathed his sword and killed the poor man.

This gave rise to the saying that spilling salt brings bad luck. If it is spilled on the table, take some and throw it behind your left shoulder.

According to a Tibetan tradition, ringing a bell in all the rooms of a new house helps to chase away negativity and make room for good luck. 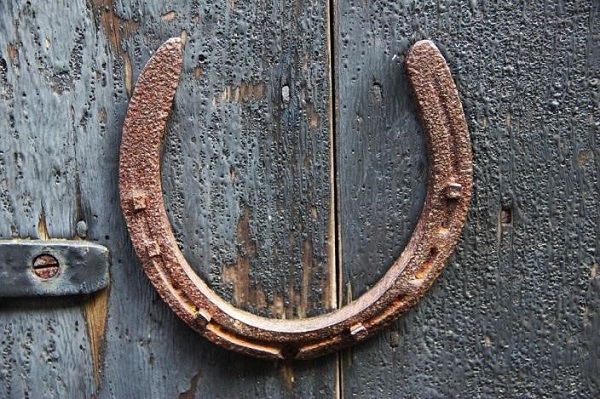 If they fall to the ground, before picking them up, place your foot on them to cancel the bad omen. If one of the blades sticks into the ground when it falls, it is an omen of death. On the other hand, they wear well if kept hanging on the wall.

Disgrace sits at the table

Many of us, at least once in our life, has happened to get together for a dinner and found ourselves, unfortunately, the thirteenth at the table. To cope with this disaster, the British used to put a porcelain cat at the table. In Italy the table is set for fourteen, serving one more person.

The origin of this superstition dates back to the pre-Christian era; precisely, it refers to the Nordic myth in which during the supper of the gods, the god of destruction intervened, killing the patron god of men.

Subsequently, reference was made to the Christian tradition of the Last Supper, in which the thirteenth was Judas. For this reason, having thirteen at the table in modern societies is an omen of death within the year of one of the guests.

Oops, the oil has spilled

This is a bad omen. In addition to being linked to an economic problem, in the past, the houses had rough wooden floors, and pouring oil on them meant having a perennial stain due to the ease of absorption of the wood. In any case, there is a remedy for everything and, to remedy the bad luck, it would be appropriate to throw three handfuls of salt behind you.

Above the ladder you live, under the ladder, you crack

Do you have ladders in your house and have you happened to pass them by mistake? No problem, just come back and the bad luck will wear off. This superstition dates back to the Egyptian and Babylonian civilizations; according to these cultures, as it later happened with the Christian era, the ladder leaning against the wall drew a triangle, seen as a sacred symbol.

During the Middle Ages, on the other hand, the ladder was a symbol of danger, as the soldiers who supported them during assaults on the castles were killed by boiling liquids and, moreover, they were tools used to raise the condemned to death to the gallows.

How to get rid of bad omen in house?

In short, you cannot get rid of a bad omen but you can fight its negativity. If something like that still happens you want to get rid of the negativity coming together with that bad omen you can:

Stay positive: this step is very important as there is no better way to fight the darkness that fighting it with light. If some bad omen shows up in your house simply laugh at it and try not to take things too seriously as this would charge it with negativity even more.

Cleanse your space: if after a bad omen you sense something is quite off in your space, cleanse your space with a cleansing ritual or smudging. After that, you can open windows to let bad energy and negativity go away.

Draw a sigil: Drawing a sigil is another great easy tool you can use to fight bad omen back. You can create a custom sigil for protection and leave it right there where the bad open took place. If you want to know how to create your own sigil check this guide.

Use magic: If you feel more bad luck is around you don’t forget some negative energy can be at work! So after cleansing your space you can cast a protection spell on your own or, if you need help, let me cast a combination of protection and a cleansing spell to help you find serenity and positivity in your house once again! If instead, you want to know if something negative is in your house and how to get rid of it, order a professional tarot reading by Mystic. Amber!