Find out “Why do Witches have Brooms?” (Symbolism)

Brooms have always been associated with witches but why? And why do witches have brooms and how do they use them? Let’s find out!

Why do witches have brooms?

The broom is used to open the sacred space, drawing a circle almost as if it were a compass. It has the function of protection, purification or attraction.

It is often placed next to the front door, outside or inside to manifest different purposes. If the sorghum is facing upwards it indicates protection, if placed downwards, on the other hand, it eliminates heavy energies.

“As in heaven so on earth, as above so below” reads the emerald table. This statement indicates a natural law according to which everything follows a specific order that is repeated at every level of existence in a sympathetic way.

The broom is used, in everyday life, to clean the house, remove dirt, and take it away. Here then, even on a mystical level, its task is the same: to clean the environment or people from dirt. To do this, the sorghum, of course, must be placed downwards. 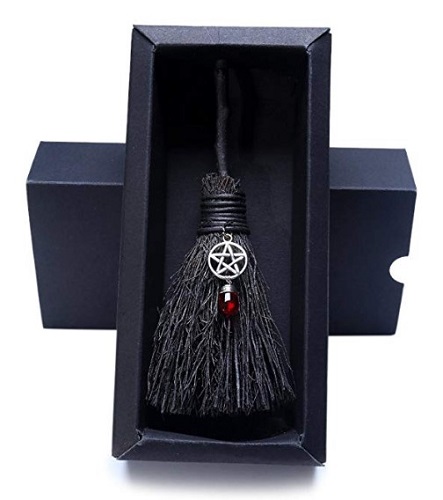 The fact that the sorghum is facing upwards to indicate protection reminds us of the image of a maid chasing away a victim with the sorghum.

In order to be used as a magical and ritual object, the broom must be consecrated and activated. It is possible to do this with sacred (or blessed) water and fumigation with specific purification and protection herbs. Subsequently, the wood will be activated with a special oil through which to charge it also with our intentions.

At that point, it can be presented to the 4 elements and directions as we saw in the consecration of salt.

A broom: an ancient item

Let’s start by saying that because of its place as a household object, brooms were easily associated with women, especially in the medieval period, as women were the ones looking after the home. But we know that ancient symbology does not see the broom only as an object of domestic cleaning, but also as an instrument of ritual purification. It was in fact also considered the means by which the Witches took off.

In this case, we speak of the tradition of the Dominae Nocturnae linked to the goddess Diana but also, in Northern Europe, to the Queen of the Fairies.

These are the flying hosts of witches following Diana who visited the men who honored and respected them. In Scotland, this belief existed in relation to fairies and the Queen of the Fairies was the one who guided these women.

In the first millennium AD, among the writings of the monks, there is information about the cults linked to the Lady of the Game, Diana, but already in 367 AD, the tradition of the Dominae Nocturnae was widespread enough to be banned as a diabolical belief.

Initially, the household broom was a stem cut from a broom plant with a tuft of leaves at the end. The broom had magical properties for good and bad, it was associated with both granted and denied fertility, and marriages were celebrated with the broom as a symbol of abundance and good luck. Jumping over the broomstick is said to have been part of the wedding rites of the Gypsies.

In India, the broom has an equally important role as in Europe, but since those who used it belonged to the poorer classes, this fact did not spread internationally for a long time. We know thanks to Margaret Murray that the house broom was made with leaves of date palm and was considered sacred, but no magical properties are associated with it.

Its branches were used by chimney sweeps to clean the chimney and it is said that it brings luck to use the broom in this operation. It seems like the ancient tales of witches coming out of fireplaces with brooms generated these popular customs!

Or, instead, the cleaning of the fireplace was done precisely to welcome witches into their homes. In fact, in Ireland, fireplaces were decorated with evergreens to welcome ancestors and spirits.

The broom, used to collect dirt, is symbolically a catalyst for Evil. If facing forward, the bristles express the intention to capture Evil to exploit its magical power; in this way the witch can fly in the direction of the place where the Sabbath is held. But on the contrary, the bristles want to mean the opposite intention, that is the need to get rid of Evil after neutralizing it.

In popular tradition, it was customary to sweep the floor of the house after receiving an unwelcome visit. Even today, many keep the ‘good luck broom’ hanging behind the door of their house. It is not uncommon to run into vans or three-wheelers that flaunt brooms placed vertically and with the brush facing upwards.

Related:
Horseshoe for Luck – Is it Up or Down? [Explained]
20 Superstitions about Good Luck (& How to Use Them)

Hoisting a broom like this is sure to bring you bad luck and may even set obstacles in your path as you try and reach your goals.

The broom is the ritual object that, most of all, characterizes the witch. In our imagination, it is the witch’s companion or the object that makes them fly across the skies.

Analyzing this first aspect, it is evident that we will never see a witch flying in the sky, at least with our physical eyes. The broom has the same function as the drum for the shaman. It is the vessel through which, in an ecstatic state, the witch flies in the 3 worlds.