We all know white sage is incredible for smudgings, but do we know all its benefits and how to give them the chance to manifest and affect our practice? Let’s learn more about white sage smudge benefits here and what we can do to use white sage in a successful, magickal way!

What is white sage?

White sage, also known as Salvia apiana, is a species of sage native to the southwestern United States as well as northwestern Mexico. It grows spontaneously, especially in Southern California, in the Mojave and Sonora deserts, and has always been considered sacred for many of the Native American populations of the west coast, where it is used according to numerous uses; the most widespread is undoubtedly the so-called fumigation: the smoke made from burnt sage has the ability to purify the invisible aspect of a person.

It can also be used before ceremonies by directing the smoke of a branch or a leaf towards the person, starting from the head down to the feet, using a feather to more easily direct the smoke. White sage is equally effective in the purification of places, before and/or after a ceremony, or following painful episodes such as a heated argument in a specific environment. In this case, it may be sufficient to let a sprig or a leaf of white sage burn on a small brazier or, alternatively, if you want to carry out deep cleaning of the environment itself, it is possible to turn around the room with a lit sage leaf, paying close attention to the corners.

It is a good rule to carry out a purification with white sage even in the places where you settle for the first time, in order to eliminate the residual energy related to those who previously lived in the house. This purification is immediate and extremely profound.

According to some traditions handed down from the Pacific Coast, it is customary to burn white sage on a shell. Further testimonies instead see the twigs collected in a small bundle to be held in the hand. In any case, after having lit it, as soon as embers start to form, it is advisable to extinguish the flame and let them emit the characteristic smoke. White sage can also be used for the preparation of herbal tea, traditionally used by Cahuilla women to recover after childbirth.

In other tribes, it was used for the preparation of sweets and energy preparations. A study conducted by the University of Arizona showed that white sage has potential antibacterial properties. For this reason, it has been used successfully for millennia by Native Americans and still is today because it allows one to:

According to shamans, in fact, white sage is able to free space from any evil spirit or negative energies that may be present there. This power is released by the plant, specifically by burning its leaves, typically grouped in the form of rods or sticks.

Even today many Native Americans, and others, use the stems and leaves during purification ceremonies and to attract prosperity.

Science is also beginning to study the properties and according to recent studies, the quality of our air and our environment depends on negative ions. Negative ions are naturally present in clean air. In a city, the amount of negative ions is significantly reduced due to smog, household appliances, and synthetic fabrics.

The absence of these ions in the air causes fatigue, depression, allergies, asthma, and a weak immune system. In fact, on the market, there are specific ionizers for the environment that help to sanitize and purify the air effectively.

Well, having said that, white sage, when burned, releases an incredible amount of negative ions! 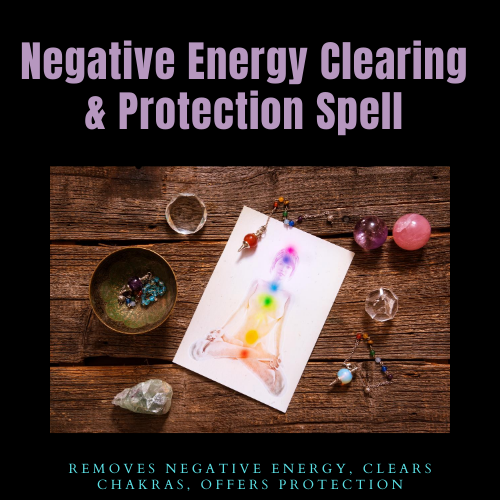 The Negative Energy Clearing & Protection Spell is a powerful combination of three rituals/spells designed with the ultimate goal of clearing away negative energy, clearing and balancing the chakras of the body and offering a protection spell that lasts 4-6 months!

What is white sage used for?

White sage can be used in any number of situations, including to clean yourself, others, objects, a room, a building, a glass, or even a piece of land.

I regularly burn white sage in my home, when I travel, and to clean my windows. The other day I brought home a couple of used books from the bookstore, and when I brought them home, I lit up my bunch of white sage, set a cleaning intention, and held the books in the path of smoke to clean and dissipate any energy of others that persisted on the pages of books.

The easiest and most popular way to tune into the benefits of white sage is by burning the dried leaves. This ritual is known as sage incense, and it is practiced by burning a handful of dried sage and then directing the smoke to the areas to be cleaned or protected.

As the leaves burn and the smoke swirls, churns and begins to fill a gap, it is cleaned. When burning white sage, it is important to express gratitude for the help of the plant spirit, as well as to express your intention as to why you are burning sage in the first place.

In this simple way, the energy of white sage brings cleansing, protection, and blessings to the space in which it is burned.

The smoke clings to negative energies, and as the smoke begins to dissipate, it transforms those negative energies into universal energy. And so, your intention of cleaning, clearing, and protection is fulfilled.

Also read:
What to Say When Smudging a House? [Different Chants]

If the smoke released appears thin and delicate when the white sage smudge is lit, it means that the energy of the house is clean and purified of negativity.

Otherwise, if the smoke appears thick and curved, it means that the air is saturated with negativity: the sage will neutralize it, simply by releasing the smoke for an hour. You can then try again the next day: you will notice that the smoke trend will certainly appear more harmonious and delicate.

However, it is possible that in certain areas of the house or in the presence of certain subjects, smoking has a “negative trend”: take note and know that these conditions will require a greater commitment from you. A stick or just leaves – which is better?

When you go shopping for your white sage, you will likely have the option of purchasing a bundle of white sage, sometimes called a wand or stick, or a bag of loose-leaf sage.

Honestly, either option is fine. I find that bundles work well for cleaning larger areas, while loose-leaf white sage can be more accurate. Often, when I buy a bundle, I take out a single sage leaf to light by itself. This effectively transforms a bundle of white sage into a single leaf.

You can also fill a fireproof container with loose-leaf sage and light several leaves at once to use the loose-leaf white sage to clean larger spaces. If you have the chance you can even try to harvest white sage or buy white sage and make your own smudge stick! Do what feels best for you!

Also read:
What Kind of Sage is Used for Smudging? [Different Shrubs]

Where to buy white sage?

White sage can be purchased in ethnic shops, often in organic and fair-trade supermarkets as well as in herbalists who sell incense and similar. However, it is easy to find it from authorized dealers even online. If you have the chance, I highly recommend creating your own white sage smudge stick! I have a guide here.

Need more cleansing or protection? Don’t forget I can help you with my spell casting service to change the energy around you and give you serenity, peace, and comfort! Check out my shop and find the right spell for you!

How to Make Smudge Sticks with Flowers? [DIY Guide]
What Kind of Feather is Used for Smudging? [Colors Explained]
What to do With Sage Ashes or Stick after Smudging? [Guide]
Is Smudging Bad for Your Lungs? [Which Herbs To Pick?]
Does Smudging Kill Germs? [Here's How To Do It Right]
Here's How to Use Palo Santo Smudge Sticks [Tips & Tricks]
What is the Purpose of Smudging? [Finding the Right Herbs]
Where did Smudging Come From? [History Explained]