A honey jar spell is one of the most loved practices when it comes to finding balance, spreading love into your life but also to attract some bright and positive energy. Of course, some people might want to use it as a vessel to spread black magic but, whatever kind of magic you are into, there are some things you need to keep in mind to allow the honey jar spell to work.

So today, we’ll answer a question: can you open a honey jar spell?

Honey jar spell: what is it?

A honey jar spell is usually a great way to attract positivity and sweet vibes between people who usually don’t get along or are having a difficult time getting along. It’s known to set a peaceful and more relaxed atmosphere around the targets of the spell.

So let’s suppose you are not getting along with someone in your life and you need to “sweeten” the situation between the two of you, well, a honey jar spell is definitely the right option for this goal!

I’ve seen a lot of black magic curses with honey jar spells online but, I have to admit, when I first think of honey jar spells what comes to my mind is positive vibes, loving caring feelings and so on!

I really think that a honey jar spell main goals are helping you connect with others in the name of peace and connection. I used it once to sweeten my connection with a guy I was dating back in the days and it helped so much! We didn’t get along and we fought a lot but with the honey jar spell, things got easier and more relaxed. 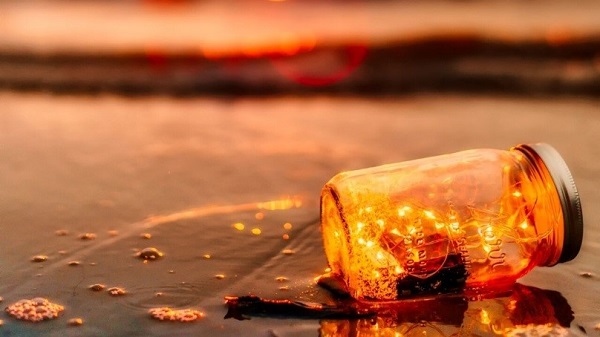 When you’re casting it, the most important part is to set the true intentions and try to visualize you and the person you want to get along with finally in tune, having the best time together.

The casting usually goes together with the lunar phase and each spell has its own timing to boost its effects and manifest.

How long does it take a honey jar spell to work?

A honey jar spell will usually manifest within 28 days as, as I said, it goes with the lunar cycle! That’s the reason why it can be repeated at the second lunation, however, we must wait 28 days or a complete lunar cycle before trying again.

So can you open a jar honey spell?

Absolutely not! People ask me this question all the time and the short answer is no! Why? Once you cast the spell you should forget about it and give it the time to manifest at its own pace.

Opening a jar honey spell after casting the spell is something you should avoid as basically you have to think about something: when you cast the spell you attract the energy your way and the ingredients you used to need to charge and spread its energy around you and out to the universe so it can help you manifest what you are wishing for.

Also read:
3 Signs Your Love Spell is Manifesting [& My Experience With It]

Let’s suppose you cast the spell but then you want to open the jar to see if something is happening it’s like you are dispersing the energy out and all the waiting time is canceled.

Another thing to consider is that if you open a jar honey spell it’s like you are sending the energy and magic a clear message: you don’t trust the process and plus, you are not trusting your casting skills! These are the reasons why it should be better to avoid opening a jar honey spell and give it its time to manifest.

I opened a honey jar spell: what should I do?

Well, dear, I will be honest with you. The best thing you should do is to get rid of everything and cast a new spell when lunation is in the right phase for the type of spell you have in mind.

You need to throw the honey jar away.

I would recommend destroying the jar and basically, ripping off the different ingredients and elements that were forming the jar so you don’t live anything at work.

I recommend you to do this: get rid of the candle by cutting it into pieces and placing it in a plastic bag and then throwing it away, then try to destroy the jar and wash away the honey if you can with running water. Then wait at least a few days and cast a new spell with a new jar.

Don’t reuse the ingredients you used the first time but use new ones and this time, be careful and don’t open the jar!

What I do with the jar after the spell manifested?

If for banishing and black magic spells you have to get rid of the ingredients you used for a spell, when it comes to a positive spell like a honey jar spell to bond with someone and connect with this person, even more, it would be amazing to keep it as a reminder of this need of connection but also as a powerful way to attract even more positive energy between the two of you.

Where to place it then? Well, you can definitely hide it in a place you prefer at your place like in a box, in a bag, under the bed. Basically, you can choose whatever place you would like as soon as nobody sees it!

Somebody found my jar. What should I do?

For this kind of stuff, you are in charge and you know best!

4 Ways of Using Spell Jars & How it's Done! (DIY Guides)
Explained: "How to Write Your Own Spells" (In-Depth Guide)
Here's "How to Break a Honey Jar Spell" (Witchy DIY Guide)
Here's How to Make Moon Water [The Witchy Way!]
Here's How to Properly Store Moon Water [DIY Tips]
5 Moon Water Benefits Everyone Should Know About
What is Moon Water Used For? [A Witchy Guide]
4 Ritual Baths for Full Moon Night [Step-By-Step]