Cherry, whose scientific name is Prunus avium is a tree that belongs to the Rosaceae family, originating in Europe. Also called bird cherry or wild cherry, it can be found throughout continental Europe and in colder areas of Asia Minor. Let’s learn more about its symbolism, spiritual meaning, and uses.

Its lovely flowers, seen in all their beauty in April, vary from white to bright pink.

It is a deciduous tree that can reach 30 meters in height. The bark, purple-brown in color, appears smooth while the leaves are alternate, ovoid in shape and measure from 7 to 14 cm. 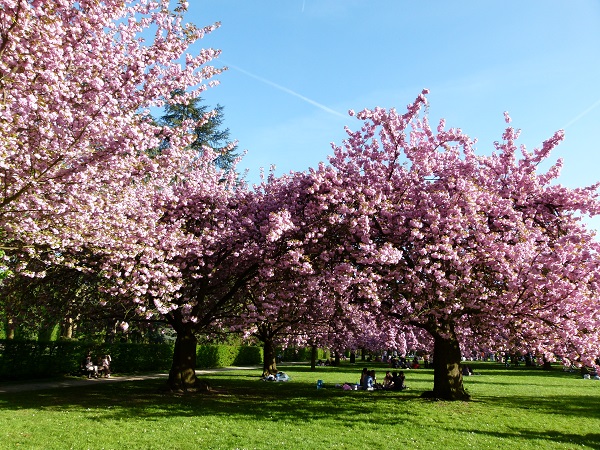 It is delicate and fragile but also tenacious in its perfection, representing the beauty and transience of men in the world. Therefore life cycle of this tree is that of the people themselves: one is born, lives in splendor, and then leaves the tree to die and reconcile peacefully with the soil, that is the place from which we come.

In Japan, a country in which it is strongly present in popular culture, an anniversary is celebrated called Hanami. It is the party that celebrates the ritual of observing flowers. The symbolism associated with cherry blossoms owes much to the Hanami festival.

In the Japanese language, recalls in its symbolism the whole Japanese philosophy linked to the culture of patience, respect for nature, and inner peace.

The symbolism associated with this tree owes much to this recurrence and to the value it represents for the Japanese. The idea of ​​rebirth and auspiciousness represented by the flowering is in fact associated with an important period like April, when the school year ends and many Japanese students leave school to enter the world of university and work.

The cherry blossom, or Sakura in the Japanese language, recalls in its symbolism the whole Japanese philosophy linked to the culture of
The idea of ​​rebirth and good luck that this tree represents comes from here.

April is a very important period in the life of every young Japanese. After school, he will have to confront and face the world of work or university.

The History of Hanami Festival

Hanami is not a celebration with sad tones (given the observation of the catura of flowers), but a moment of great celebration for the Japanese.

Two centuries before the year 1000, a celebration started in Japan where this tree acts as the only great protagonist and has been celebrated ever since. We are talking about Hanami, the festival celebrating the ritual of observing flowers. Despite its literal meaning, this refers entirely to its blossoms, whose flowering occurs in the period of April.

Hanami is an ancient event of considerable importance for the Japanese. The symbolism linked to this is connected to the Japanese culture and, consequently, for the western one. Over time, Europe and the United States have inherited the symbolic value that the countries of the Rising Sun attribute to this special tree.

From the first expeditions to the Far East up to the period of the great European colonial empires, the explorers and anthropologists of the time observed with extreme interest the care towards nature that the oriental populations showed, particularly the flowers. In many nineteenth-century noble palaces of the old continent, Asian-style decorations can be seen depicting the observation of cherry blossoms, a symbol of good luck and inner peace.

Hanami is in fact celebration of the rebirth of nature best expressed by this tree. Awareness of their transience is also noted. It blooms in a short time and just as quickly leaves the tree to reconcile itself to the ground. The show is represented by the fall of the flowers. Observation of the show pushes the Japanese to reflect on the ephemeral value of life.

They use this opportunity to have a picnic with friends and relatives, sitting under the trees and spreading a blue plastic blanket under them to collect the fallen flowers. April, as mentioned above, is indeed a very important moment, especially for young people, because for many the end of school symbolizes entry into the adult world and thus the beginning of a new life.

It is also a sign of wealth and good luck. In the ancient Japanese tradition, this represented the abundant harvest of rice in the months following the spring.

It inspired an ambivalent symbolism. In Japan, it represents the bliss and impermanence of life, while the cherry alludes to the samurai ready to sacrifice himself.

Its flowers, called sakura, recall purity and renewal. Even today, a tea with cherry blossoms is prepared on the day of the wedding and given to the bride and groom as a wish for happiness and long life. “Admiring the flowers” is a traditional Japanese custom of enjoying the beauty of spring.

In Albania, cherry branches are burned on the nights of 24, 31 December, and 5 January to fertilize the vines.

While in the French countryside, lovers place a branch in front of the door of the girlfriends in the night between April 30th and May 1st.

In Germany and Denmark, it was believed that these trees were the abode of demons, always happy to cause diseases and misfortunes to those unfortunate enough to approach.

According to English tradition, dreaming of these trees is an unfortunate omen.

In Italy, it is associated with San Gerardo, the patron saint of Monza and symbolizes courtesy. Cherries with their round shape also evoke sensuality, kisses, female lips, hence why in the Middle Ages they represented lust.

Sacred to Venus, a cherry is used to attract love: it would be enough to tie a lock of one’s hair to a branch of the flowering tree.

Another legend tells that if we want to know how many years have left, we need to shake the tree when it is full of cherries: the number of fallen fruits will reveal the mystery.

To purify yourself of the negativity caused by the end of a relationship, make an infusion of cherry peduncles (100 grams), mint leaves and lemon balm. Strain and drink it three times a day.

If you want to propitiate abundance or have children, make a necklace of cherry pits and hang them on the branches of a strong and sturdy tree, or put it behind your front door.

Bring some flowering branches to their graves to attract the ancestors’ benevolence.

The infused peduncles perform a diuretic action and are recommended in renal insufficiency, hyperuricemia, lower urinary tract infections, and edema. The decoction of the cortex calms stress and insomnia.

You can also use it to:

Cypress Tree Symbolism and Meaning [A Symbol of Mourning]
Next Post: How to do the Spiritual House Cleaning? [A Guide For Beginners]