Today we will cover one of the most powerful resins you can easily add to your daily routine even if you aren’t an expert witch. We will talk about frankincense’s magical properties!

Frankincense is a gummy aromatic resin that is made from a tree that grows in Arabia and Southern Africa, the Boswellia thurifera, also known as B. sacra. 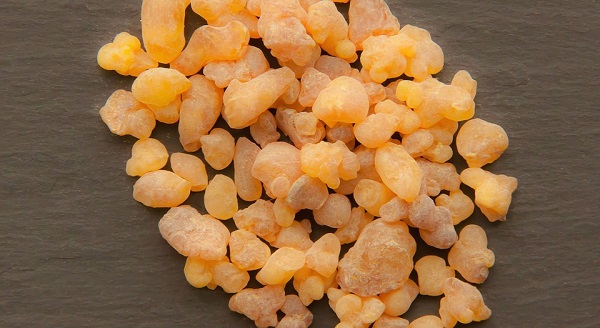 Frankincense (the name refers to the pre-eminence as “true” or “frank” incense) is also improperly known as olibanum. This term derives from the Arabic al-lubán (“milk”), a reference to the extracted milky substance from the tree.

However, in reality, the olibanum is extracted from the Boswellia serrata and has the characteristic citrus fragrance.

It is often used in Oriental mixtures and is famous for its extraordinary fixative properties. It has a spicy and balsamic smell, similar to that of incense.

It is the starting point for any mixture you feel like doing; it is the incense par excellence.

It is a famous and crucial resin with incomparable esoteric magic virtues that is made to exude, support for every kind of magical or religious practice.

By its characteristics, it can adequately replace any other resin or grass in a mixture of herbs.

Its nature is mainly solar, although it can be approached, as already mentioned, to any other astrality – usually with Sun, Moon, Jupiter.

According to Egyptian mythology, the phoenix, a mythical bird, carried incense in the land of Punt with its claws.

According to the legend, incense resin is a special gift from the gods. Its delicate and balsamic aroma was the most sacred and precious for Egyptians – it was like a divine perfume. In their language, the incense was called “what makes divine.”

It was used for sacred purposes and allowed access to the upper spheres; accompanied the prayers, sacrifices, funeral ceremonies, public events, the crowning of the pharaoh, and the daily rites celebrated by the priests in the temples.

According to Arabian / Judaic mythology, this resin, called levonab, represented one of the treasures of the Jewish temples.

It was one of the ingredients of the Moses mixture, and it was also burned individually. Incense is mentioned twenty-two times in the Bible.

Until Solomon’s time, its use was limited to religious circles. Some ancient legends say that Adam was expelled from Eden and was allowed to take the incense away.

In the Gospel, according to Matthew 2:11, gold, (frank) incense and myrrh were the three gifts offered to Jesus by the Magi from East.

The Phoenicians imported this resin from Southern Arabia to Israel since the tree did not grow in those lands.

The one is given to Jesus by the Magi probably came from Yemen.

Incense, in Latin olibanum, is still used in ceremonies and religious functions of the Catholic Church.

A fun fact: it is said that the Roman emperor Nero burned a quantity of frankincense equal to the one-year requirement of the city of Rome, on the occasion of the funeral of his wife, Poppaea Sabina.

Why should we let frankincense burns to spread its magical powers?

Tip: The burned down bits no longer release the characteristic fragrance. They have a very unpleasant smell. I suggest that you remove them and add new ones rather than let them release that smell.

Besides its purifying powers, frankincense is also perfect for an easy love spell.

The first thing you have to do is take a picture of the loved one and write on the back the full names and surnames of you and the other person.

Additionally, you will write the following phrase: “You will love me as I love you.”

Then light the candle and hold this picture above it, so the smoke from the candle consumes it.

Hold it for a few minutes and then put it on a table or altar.

Let the candle burn down completely.

When that happens, pour three drops of the melted wax on the backside of a picture (where you have those names written).

Then take a picture, fold it in half and store it in the purse.

Don’t forget to think about that loved person while performing this spell.

You can also find a few think of me spells here.