Moon has its roots as the ancient symbol of the Great Mother and has to do with the most natural and instinctive part of femininity, which is expressed in reproduction and attachment to family, life, and above all, to land.

Moon personifies essence, power, vitality, female knowledge, sinking its roots in the ancient symbol of the Great Mother. It represents femininity and is considered the sensitive side of the ego, directly affecting nature but above all the rhythms of the woman’s body compared to the masculinity of the Sun, which has a balanced structure. Whether considered masculine or feminine, it universally symbolizes the rhythm of cyclical time: universal becoming.

The phases of birth, death, resurrection of the moon personify immortality, perennial regeneration, enlightenment. Its symbolism is ambivalent: it can be malignant, but also beneficial and associated with fertility. In myth and legends, the moon represents the divinity of the woman, the feminine principle, just as the sun symbolizes, instead, the masculine principle. It has always been an object of mystery and has inspired strong and meaningful emotional expressions.

Since ancient times it has been at the center of myths, cults, divinities, and superstitions related to beliefs on fertility and reproduction. Its cyclical nature has made it an ally of the female reproductive cycle and therefore the patroness of those deities who supervise birth protectors of marriage and childbirth but there are also masculine deities linked to its energy and power

5 Strong Deities That are Associated with Crows

Selene is the goddess of the moon in the ancient Greek polytheistic tradition, born from the love between titans. His mother was Theia, the divinity of light, united with his brother Hyperion, divinity of the sky’s brightness. Selene had two brothers: Elios, the god of the Sun, and Eos, goddess of the dawn.

Also called “the Radiant”, Selene illuminated the earth with her superhuman beauty. The goddess Selene was traditionally described as a woman of incomparable beauty and a pale face.

Depicted in long flowing white or silver robes, she carried a torch in her hand and a crescent moon over her head. Her most characteristic image sees her in the firmament driving her lunar chariot, pulled by white and meek oxen. Selene belonged to the Greek triad of moon gods.

Together with her were Artemis, the growing moon, symbol of youth and carefree, and Hecate, the waning moon, a symbol of old age and wisdom. Selene was the depiction of the full moon. For this reason, within the triad, she had the role of mother.

By virtue of this triple characterization of the moon, Selene was the symbol of the fullness, maturity, and fertility of a woman, who carries the seed of life and new birth in her womb.

Artemis was in fact known as the lunar goddess (terrestrial) together with Selene (celestial) and Hecate (underground). She was the daughter of Zeus and Latona and spent her life in the woods in the company of the Nymphs devoted to her.

His most recurring image was characterized by a silver bow (which is symbolic of the half-moon or crescent moon), a quiver full of arrows (like her brother Apollo) and a retinue of faithful dogs.

She often had her head surrounded by the moon and stars, in her hand she carried a torch (as a lunar deity) and some animals were sacred to her, such as the bear which has two opposite characters: protective sweetness towards her cubs and ferocity bloody towards those who oppose it; the lioness, majestic, fascinating and very skilled in the art of hunting; the fallow deer and the hare, by their nature fugitive creatures prone to a secluded and shy existence.

If Selene is associated with the full moon and Artemis with the crescent moon, Hecate can be connected to the phase of the new moon, that is, the moment when the moon is totally dark.

This is the phase of the moon’s death, which runs through the world of the underworld in which this divinity reigns. Hecate was in fact an infernal deity originally from Asia Minor who was then exported to Greece and worshiped in a triad together with Artemis and Demeter, goddess of the earth.

In his Theogony, Hesiod wants her to be the daughter of Perse and Asteria, of the lineage of the Titans, but in the rest of the poetic tradition Hecate is identified as the daughter of Zeus, or of Tartarus or Aristaeus.

Like all underworld deities, dark attributes dominate in Hecate, which links her to the sphere of spells, evocations, and ghosts. For this reason, even after the end of paganism, this divinity remained linked to magic and witchcraft.

In fact, wizards and witches sacrificed lambs and black dogs to her. Its altars, as well as in the houses, were erected in the trivi and in the quadrivi, hence the nickname “Trivia”. 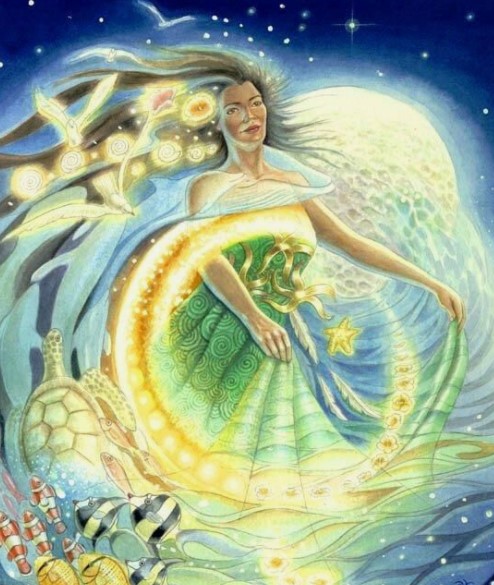 Sina in Akkadian or Nanna in Sumerian is the Sumerian moon god and protector of the lunar cycle, son of the sky god Enlil and the wheat goddess Ninlill, Sina was associated with cattle breeding, he bestowed fertility and prosperity on cowboys, ruled the increase of water, the growth of reeds, the increase of the herd, etc.

His consort is Ningal “Great Lady”, goddess of reeds and swamps, every Spring the worshipers of Sina reconstructed the myth of Sina’s visit to his father Enlil with a ritual journey to Nippur, bringing with them the first dairy products of the year.

Sina was depicted as an elderly man with a flowing lapis lazuli beard, wearing a four-horned headdress topped with a crescent and riding a winged bull, and he was also depicted as a herdsman or boatman.

Beloved and revered in the city of Khmonou (in Greek, Hermopolis) in Middle Egypt, Thoth was the God of writing, magic, wisdom, mathematics, and geometry, inventor of hieroglyphs. He is the patron saint of scribes; he was responsible for the invention of writing.

Another characteristic of Thoth was that of being a lunar deity. Since the moon was one of the bases of the Egyptian calendar, he was the “collector of years” and the “lord of time”. In the Low Age, as the moon replaced Thothiva for the sun during the night, he was called the “Silver Aten”. It was represented in the form of baboon and ibis. On his head, he had a crescent-shaped moon.

There you have them, the main deities associated with the moon. If you are looking for a way to connect with the moon to a deeper level, you could rely on the deity resonating with you and your energy the most. It would be amazing for both your craft and your spirituality.