Since prehistoric times, the owl has been considered a messenger of death. Even today in many European countries it is believed that a family member will die if an owl lands on the roof of the house or on a nearby tree. The owl was the hieroglyph of death for the Egyptians.

At the time of Pliny, it was believed that the appearance of an owl in the city meant destruction. For many writers of later ages, the owl was ominous, repulsive, horrible, hated by all other animals.

Despite the gloomy aura that surrounds it, positive qualities have also been attributed to the owl: deep wisdom, prophetic powers, and the ability to ward off evil. Her eyes are endowed with sacred power as she has the sharpest eyesight of all animals.

This ambivalent image is a pale reflection, spread over time, of the owl as the incarnation of the terrifying Goddess of Death. She was revered as a deity and perhaps respected for her sinister but necessary task in the cycle of existence.

Owls have always been interpreted as symbols of wisdom but there is so much more behind this animal and its symbolism and representations. For example, did you know that there are deities associated with owls and that each one of them is associated with one of the incredible meanings and messages an owl has?

5 Poweful Deities That are Associated with Owls

In Greek mythology, Hypnos was a deity who took the form of an owl and flapped its wings to make men sleep. It was known to the Romans under the name of Somnus.

Homer’s scholiasts (ancient commentators) wondered about this. According to some, the Lemnienians were very fond of wine, so they welcomed Hypnos with pleasure. According to others, the god was in love with Pasitea, one of the Three Graces, who lived in this city. Hypnos had the power to put both men and gods to sleep. He was considered benevolent and was surrounded by Dreams.

According to Hegel, “philosophy always comes too late. As a thought of the world, it appears for the first time in time, after reality has completed its process of formation and is well done. […] Minerva’s owl begins its flight at dusk.”

By this the German thinker means that philosophy comes to understand a historical condition only after it has already passed, implementing hindsight without being able to offer precognitive abilities.

Did you know that the Owl of Minerva was also represented in the Greek one-euro coin, to remember their mythological traditions and culture, especially the philosophical and scientific ones that have accompanied this population for centuries and centuries?

The Athenian silver coins (Drachma) were called “owls”, a name deriving from the image depicted on the coin: the Little Owl, a bird sacred to the goddess Athena.

Ragana (in folk tales she is referred to as a “bony-legged witch”) in Lithuanian and Latvian folklore represents the image of the destructive and regenerative goddess.

Her name derives from the verb regeiti, which means “predict, foresee” or perhaps from the Lithuanian word ragas which indicates “horn, crescent”, thus reconnecting to the symbols linked to the moon, rebirth, transformation, and the forms of foresight.

The meaning of her name is not entirely negative, but she was later demoted to the role of a sorceress who brought bad luck to humans and animals.

Ragana, the goddess of witches, was believed to be a seer who could reveal the future and knew how to keep supernatural powers in check. Her appearance might have been that of a bony, yellow, misshapen old bunker, with a large beaked nose whose tip touched the chin, or that of a beautiful woman or a terrifying creature. It could take myriad forms, most notably that of a barn owl. 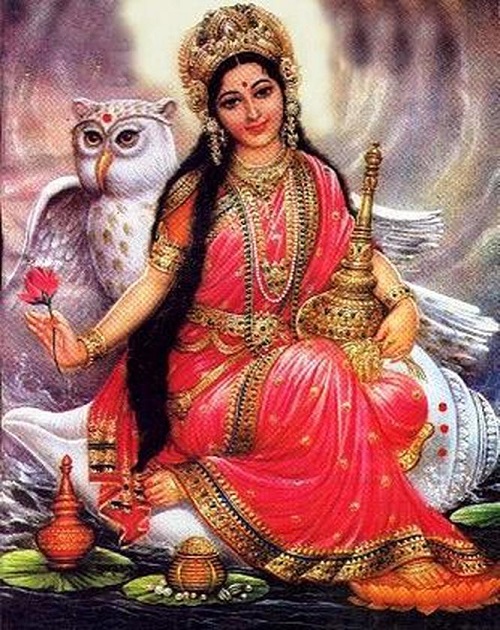 Lakshmi is the personification of wisdom. Her flower is the lotus, which she is often represented sitting upon. The lotus is a plant of great spiritual and philosophical symbolism because it is born in the mud but emerges in the light, floating on the water’s surface.

In the case of Lakshmi, the lotus also indicates that the positive fruits of luck come from work, from perseverance, from what has been sown in the past, and also from the ability to transform the potential of mud and water into something different, good, beautiful and useful.

Those who worship Lakshmi sincerely and without greed will be blessed with wealth and success. Lakshmi also has an older sister, frightening and nasty, called Alakshmi (the initial ‘a’ in Sanskrit, as in the Greek, is privative). This represents bad luck and rides a donkey.

Sometimes Alakshmi takes the form of an owl and accompanies Lakshmi, thus indicating the arrogance and stupidity that often accompany excessive luck. Interestingly, the owl represents wisdom and reflection, but is also an ill omen, as in European traditions.

In Welsh mythology (Fourth Branch of the Mabinogion) Blodeuwedd (“from the appearance of flowers”) is the non-human bride for Llew Llaw Gyffes who would never become king because the curse from his mother prevented him from marrying a mortal woman: Blodeuwedd was created magically with nine flowers (burdock, queen of the meadows, primrose, white bean flower, hawthorn, broom, horse chestnut, oak, and nettle) so that the king could marry and have an offspring.

Blodeuwedd tries to kill her husband and, as punishment, she is transformed into an owl, since then the cry of these nocturnal birds is reminiscent of a woman’s cry.

How fascinating are owls and their interpretations and presence in the traditions of many different cultures? If you feel a special connection with owls, it might be that one of these deities is trying to connect with you! Be open and ready to receive their messages!