The Earth Element, a symbol of fertility, security, stability, and nourishment; the Earth (matter) is the female principle represented by an open belly ready for the fruitful intervention of the sky (Spirit, ether, its counterpart).

The symbology that characterizes this Element can be celebrated through the meaning of the cave, the forest, and the mountain. The cave indicates the womb of Mother Earth, the sacred womb where life begins its cycle, like a hidden and protected seed, cradled by the soft earth that surrounds and nourishes it; it also represents the darkness of the maternal womb, the passage from the primordial darkness of non-life to the blinding light of birth.

The forest symbolizes the challenges of nature and man through the apparent hostility of the unknown; the light of the Sun cannot cross the thick branches of the trees, but it teaches growth and survival in different forms: here the Earth regenerates, contemplates itself, and evolves.

Finally, the mountain represents the invariability of things, immobility, and the closest connection to the sacred.

Here the Earth absorbs all the Elements: from its depths Fire becomes magma, soul of the Earth; from its heights gush out the sources of water that cut through any obstacle, and finally, here it embraces its elusive counterpart, Air, which surrounds it all.

Let’s see which main deities are associated with this foundation of our existence, Earth!

5 Interesting Deities That are Associated with Earth

First, there was Chaos, then Gaea, the earth, appeared. Thus, the ancient Greeks recounted the origins of the world and of the gods. Gaea alone generated the sky, the sea, and the mountains. Heaven, which was called Uranus, was chosen as her husband and had many children.

The Titans were born first, six males and six females; then the Cyclops, who are not to be confused with those whom Ulysses met: they also had only one eye in the middle of the forehead.

There were three of them named Bronte, Sterope, and Arge.

From the union with the sea, Gaea had other children, all divinities specialized with the waters: Nereo, father of the Nereid nymphs; Taumante, father of the rainbow; Forchi, Keto, and others.

When the war broke out between Cronus and Zeus for the domination of the universe, Gaea remained neutral: many of her children fought among themselves, one armed against the other. Gaea’s only satisfaction was seeing her children always alive, all immortal.

But when Zeus, defeating his enemies, imprisoned some titans in hell, Gaea rebelled. She joined with hell and gave birth to another monster, Typhon: it had a hundred dragon heads that spewed fire.

Touched by his mother, Typhon declared war on Zeus.

Another fierce fight lasted for several years and ended with the victory of Zeus: Typhon ended up in Tartarus, the hell of the gods.

The God Geb is the personification of the earth. Some representations portray him seated, others stretched out with one arm facing the sky and the other facing the earth. Geb is the father of the gods; he is linked to the throne of Egypt in various ways and has the role of investing the rightful heir of the royal authority.

As brother and consort of the goddess Nut, he is often represented with her lying down, with the goddess pouring out on him, fecundating her. Geb also bestows the fruits of the earth as nourishment and support: many believed that barley grew from his ribs. The hieroglyph of his name is the symbol of a white goose represented in profile.

His colors are the shades of green of the luxuriant vegetation. 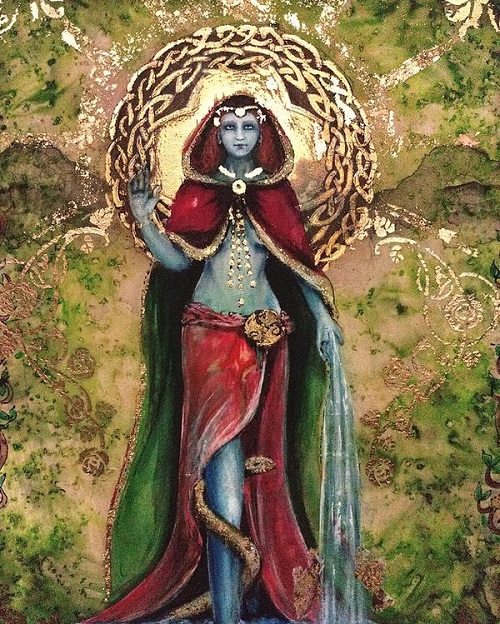 Although she is a goddess of fundamental importance, she appears little in Celtic mythological tales. What we know about her is vague and fragmented: she is the goddess of earth, prosperity, and peace, the ruler of time and life. In addition to these positive connotations, she also has a dark side. One of her tasks is to lead souls between the world of the living and the world of the dead.

The goddess Danu can be represented in two different forms. Some depict her as a single woman, often with some sort of plate in her hand. Others, however, represent her “divided” into three different matrons.

In the latter representation, the three women are usually seated. As in many other beliefs and cultures, the number three has very strong symbolism. It is the number of creations, the only one that is not sterile. The one, in itself, is useless.

Two is made up of a pair of opposites and multiplied by one always equals two. On the other hand, the three are made up of two equal elements and one opposite.

This, for the Celts, had a profound symbolic meaning. The reason why the goddess Danu is so important, besides the fact that she potentially created all living creatures, is that she gave birth to the lineage of Tuatha De Danann.

These people, the first Irish, were made up of partially divine blood. According to beliefs and findings dating back to the Middle Ages, the Tuatha invaded Ireland before the Gaels and then became their gods.

The Yoruba people claim that the origin of their culture occurred thanks to a mythical figure, a man named Oduduwa. Oduduwa, according to some tales, was a skilled leader of an army from the east, but in other versions of the myth this man was sent by the god-creator Olorun, and just as can also be seen in the Sumerian religious beliefs, the Yoruba also believe that Oduduwa formed the first human beings with clay. This belief is also linked to the almost homonymous figure of the Earth goddess, Oduduwa.

The name Oduduwa can be translated as “he who created the knowledge of character” but also “black and beautiful”, the Yoruba often refer to themselves as “Omo Oduduwa”, “sons of Oduduwa”. The traditional Yoruba religion, still known today for its ancient esoteric practices, is also called Orisha. Like all ancient cultures, it is very complex and rich in divinities.

Olorun or Olodumare is revered as a god-creator, all other deities are considered as messengers and intermediaries between Him and men, like any ancient people who lived amid nature and made it their temple, many of the deities refer to the elements 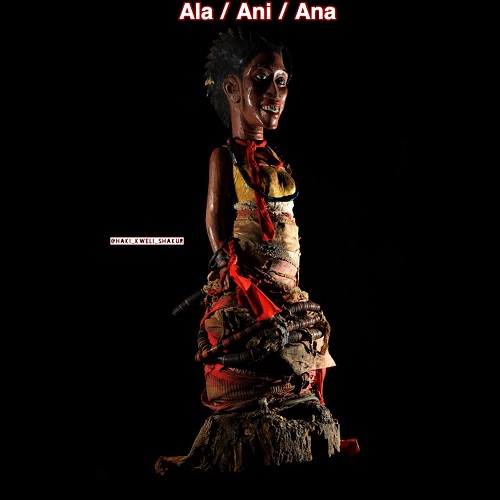 Ala, one of the most popular and revered of the Igbo deities. In the Igbo language (Nigeria), “Ala” means earth and precisely represents the power of this goddess (and of female nature) on our planet. Goddess of fertility, but also of creativity and morality, Ala – who is also referred to as Ale, Ani or Ana – goddess of the earth, is married to Madioha, god of the sky.

She is the protector of children and women. When she is angry, she not only convinces Madioha to deprive the men of rain but to cause disaster.