Dogs are often associated with attributes such as fidelity, loyalty, companionship, intelligence, obedience, protection, a sense of community, collaboration, communication, and sensory perception.

This animal is often considered a link between the physical and non-physical dimensions. The Ancient Egyptians, Greeks, Romans, and Celts considered the dog a guardian of the earthly world and the afterlife, a spiritual guide in charge of guiding journeys to the other (spiritual) dimension.

Furthermore, dogs represent safety, loyalty, guidance and that’s why they are often presented as guardians of the afterlife and guidance for the deal.

But who are the main deities associated with dogs? Let’s find out.

5 Poweful Deities That are Associated with Dogs

The ancient Egyptians imagined the supernatural power of dogs and of cats in very different ways. The cat was deified by transforming into Bastet, the cat goddess, and embodied the power of life, health, fertility, and earthly joys.

The dog – but more precisely the Egyptian Greyhound – was a companion animal and was used in hunting, but he too ended up being worshiped, transforming himself into Anubis, the God of Death, who later became “the guardian of the dead”.

Anubis was represented as a jackal or a dog, especially in the sculptures; or as a human figure with the head of a jackal or dog in paintings. Anubis is always black, because this was the color of the bodies after having undergone the embalming process. As the cult of Osiris grew, Anubis underwent a sort of “demotion” from the god of death only “the guardian of the dead”. However, he was credited with the invention of mummification.

During the mummification process, the Egyptian priests covered their faces with a “dog” mask to personify Anubis himself. The role of guardian was very important: Anubis guarded a scale thanks to which he weighed the souls of the dead with the feather of Maat. His weighing the lightness or heaviness of a soul was a fundamental function: if the soul was as light as the feather of Maat it was entrusted to Osiris; if it was heavier, it ended up in Ammit’s mouth.

Since the Egyptian people wanted to identify a dog with the god of death and as the one who decides the fate of the dead, in many Egyptian tombs, have images of dogs in them. 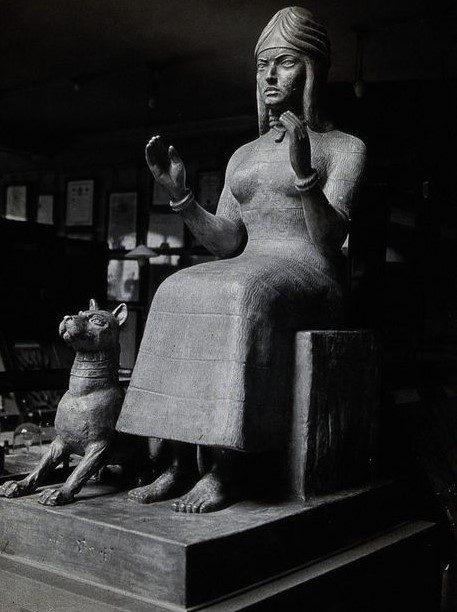 Goddess of the Mesopotamian pantheon, wife of the god Ninurta, she is depicted as a woman seated on a throne with a dog at her feet, her emblematic animal; she heals the sick and even revives the dead. However, she is also attributed with imprecations that make the people against whom they are directed incurable.

Goddess of lunar cycles, triviums, crossroads, and travels, Hecate is a psychopump divinity, capable of traveling in the world of the living and the dead, accompanied by ghosts, dogs, with three faces and three ages, she is of the most fascinating and mysterious figures of the pagan world.

She is also the goddess of magic, who reigns over evil demons in the Greek and Roman religion. She is often depicted with torches in her hands, due to her ability to accompany even the living into the kingdom of the dead. Goddess of spells and ghosts, Hecate is represented in three ways (young, adult, and old), and is represented by the number Three.

Hecate is described as “with the face of a dog, three heads, inexorable, with golden darts …” The dog is an animal associated with the chthonic world, for example, Cerberus is the guardian of the gates of the underworld. Considered a faithful guide in earthly life, the dog was sacrificed to the dead to accompany them on their journey to the Underworld: this also happened in pre-Columbian cultures, where the animal was used in funerary cults always with the same function.

In relation to this magical aspect, it is necessary to remember those demonic entities named in the oracles “dogs” and taken as a supply of Hecate in his epiphanies. These are creatures that feed on souls, who take advantage of human weakness to deceive mortals and make them deviate from the path of purification.

In the eighth Satire of Horace, when he describes the necromantic evocation ritual officiated by Sagana and Canidia, while the hags perform the horrible ceremony, with the sacrifice of a black lamb, Hecate’s infernal dogs (infernae canes) are heard in the distance. The dog-demons are nocturnal ghosts who faithfully accompanied the Goddess, leading man to madness.

For most of the tribes, the coyote played the role of a trickster, that is, a rogue, a producer of chaos, someone who doesn’t want to work hard, who repeats the same mistakes because he doesn’t memorize them, capable of transforming and therefore assuming a human form.

At the same time, however, he was also seen as a hero who rebels against social conventions with tricks and humor. His positive deeds, for example, brought humanity the knowledge of fire and agricultural techniques as well as the petrification of some monsters.

In most Native American mythology, the coyote is represented as a spiteful being who strikes a man with non-evil actions that, while causing damage, have no harmful intention. More precisely, these actions distort the positive order of a defined project and lead the victim into a state of chaos.

The coyote could therefore be considered a sort of “scapegoat” to justify the occurrence of many small daily incidents. In many myths, he was also considered the creator of human beings, although in some Native American tribes this characteristic was associated with other figures such as that of the beaver.

The legends with the coyote protagonist are many and each tribe had its own. By way of example, a myth tells that the First Woman, to help the Moon shed light, arranged the stars one by one in an orderly fashion, placing them in such a way as to make animal shapes appear shining in the night.

Except that the spiteful Old Coyote burst in joy, breaking the established order and scattering the stars as they present themselves today.

The myth tells that the Xoloitzcuintle was entrusted with the task of transporting the master’s soul to the afterlife precisely because of this striking resemblance to the god Xolotl. Like many ancient peoples, the Aztecs believed that to reach the world of most it was necessary to cross the mighty river of the underworld, every soul who failed to do so would be condemned to wander aimlessly for eternity.

The soul of the dearly departed arrived on the bank of the Chicunahaupan river 4 years after his bodily death and the only way to cross it was to find his dog on the other bank. Upon recognizing him, it dived into the water to get him on its back and help him to wade the impervious river of the afterlife.

These are the main deities associated with dogs. They are definitely wonderful deities to work with if you feel a connection with this animal and if you want its energy to lead you.