The symbol of the sun occupies a central part in every tradition: the luminous star gives life, light, and heat and is therefore in its own right the supreme epiphany of the divine.

Dante affirms that “there is no visible thing, in the whole world, worthier than the sun to serve as a symbol of God, since it illuminates itself with visible life first, then all celestial and earthly bodies”.

The sun, therefore, has an essentially positive connotation: it is a symbol of life, it illuminates and warms the Earth, allowing the growth and birth of all the creatures that populate it, moreover with its light it makes everything manifest! The Sun is an expression of strength, energy, the will to manifest, the conscious and concrete realization.

Sun god worship is thought to have originated in Asia, but nearly every known civilization has had a solar deity. Let’s see which are the most known deities that are associated with the sun.

3 Deities That are Associated with Sun

The original name of the Greek deity, the god of the solar star, is Helios who, according to mythology, is the son of the titans Theia and Hyperion and is the brother of Selene, the Moon. Every morning driving the golden chariot of the Sun, pulled by four steeds that throw fire from the nostrils, it rises to the East on the Ocean river and surrounds the Earth.

During the day it crosses the sky from East to West and in the evening it plunges again but, this time, to the West.

To return to the starting point and be able to rise again from the East, use a golden boat, circling the northern hemisphere. Arrived at his destination, he rests in his magnificent palace. It is also said that Helios owns seven herds of oxen on the island of Trinacria, representing the seven days of a week, and seven flocks of sheep, representing, instead, the seven nights.

Also read:
A List of 5 Deities Associated with Fire [With Stories]

The gods of the Sun in Egypt: Horus and Ra 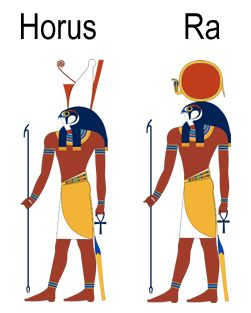 Moving to nearby Egypt we find Horus: one of the most ancient Egyptian gods, with origins that go back to African prehistory. The god’s iconography is extremely varied: he is represented as a falcon (lanner or pilgrim) or as a man with a falcon’s head.

The depiction as a hawk is the oldest and dates back to when the powers were depicted in the form of an animal. For this and for his majestic flights in the sky, as well as a meaning of his name “the Distant”, they had to be associated with the Sun.

In his half-human version in adulthood, at the height of his fighting and sexual vigor, Horus became Horakhti: The Sun at the zenith. His cult is closely linked to that of the pharaoh who, when alive, is considered an earthly manifestation, while dead is linked to Osiris. The expression Hor-em-iakhu (which means “Horus in splendor”) indicated the deceased pharaoh, who himself became – by dying – a god among the gods.

Among the most famous images of the Falco-Horus is the one in which it is perched on top of the back of the throne and its two wings, open, embracing the nape of the sovereign in a protective gesture.

If in the transliteration of the hieroglyphs Horus means Falcon, in the female version Horet indicates the sky and, by extension, Horus also began to be understood as the sky. In other cases, he was worshiped in the guise of Haroeris (Horus the Elder), a celestial god imagined as an immense hawk whose eyes were the Sun and the Moon and, when these stars were absent from the sky, the Egyptians believed that this god was blind.

A symbol of light, warmth, and prosperity, Horus was not the only god of the sun: in a later period, he was joined by Ra. It is said that Ra emerged from the waters, according to some among the horns of the God Taurus; he is a self-generating god and will share the symbol, represented by an eye, with Horus.

The eye of Ra or the Eye of Horus, although identical, should not be confused: the first referred to the sun, the second has lunar significance.

Although we are used to thinking of the Sun as a male deity, not all cultures think so. In Japan, for example, the most important deity is Amaterasu-ō-mi-kami (“Great goddess who shines in the heavens”), generally abbreviated to Amaterasu, which is the goddess of the Sun from whom all things descend.

The legends relating to the birth of the sun goddess are conflicting. In Kojiki “Memoirs of Ancient Events”, it is said that Amaterasu was born from Izanagi’s left eye, while he was purifying himself in a river after his visit to the world. In other texts, it is said that Izanagi and Izanami created the 32 main deities, after leaving the sky and settling on Earth. Among the kami we find Taiyo no Kami, “Divinity of the Sun”, to whom they entrusted the task of governing the affairs of the heavens.

Still, others narrate that Amaterasu was created from a white copper mirror, held in the hand by Izanagi. As it was for Horus and the pharaoh, Amaterasu is considered a direct ancestor of the Japanese imperial family. Until the end of the Second World War, due to this ancestry, the emperor was considered a divine being. Also, in the Kojiki we find an ancient tale that explains the disappearance of the Sun.

Following an argument with his undisciplined brother Susanoo, the god of the storm, he destroyed the embankments of the rice fields planted by Amaterasu and obstructed their ditches.

Amaterasu then retreated to a cave, plunging the world into darkness. The other deities begged her to come out, but without success. Then the goddess Ama-no-Uzume had an idea: she hung a mirror on a nearby tree and organized a party.

Dancing made the other gods laugh so much as to intrigue Amaterasu, who peeked and, seeing herself reflected in the mirror, was so surprised that the other gods were able to pull her out of the cave and convince her to return to heaven. The winter solstice is still celebrated today on 21 December, which coincides with her exit from the cave.

These are the main deities associated with the sun. If you feel a special connection with our brightest star and with its energy, you can definitely work with a deity you feel more in tune with the sun to let its solar energy help you create a better life and a wiser craft!