Chakras are a very complex and fascinating topic, so before learning which are the deities associated with chakras, let me explain a little bit about them for those of you who are new to this topic!

There are 7 Chakras and they are defined as the energy centers of our body. They can be compared to real electrical transformers that collect the energy that flows in our body. Once accumulated, they work and transform it, distributing it around our body once it has undergone the change. Chakra is a word that comes from Sanskrit, an ancient language spoken by in Asia and also used to write the oldest texts of their literature, the Vedas.

Chakra means wheel, circle, and solar disk, and is an attribute of the Hindu god Vishnu. According to Eastern tradition, the human body is composed of many levels of “subtle” energy. The sacred Buddhist text reinforces the concept that human beings are creatures with a physical body – used to eat, run, walk, stay in the world – but with an existence that is not limited to the physicality of the moment.

According to these texts, we are also endowed with a subtle body called “vajra body” (vajrakõya), which is regulated through flows of subtle energy distributed along channels (nadi) and energy centers (chakra). The energy accumulated within these points allows our physical body to also have energetic, emotional, and spiritual activity. All these 7 energy points are placed in a specific point of our body, distributed between the head and the base of the spine.

Did you know that there are deities associated with chakras?

Poweful Deities That are Associated with Chakras

Among the most revered and popular deities of Hinduism is Ganesha, the god with the elephant head. Ganesha or Ghanapathy means “lord of Ganas” or also “lord of hosts”. Ganesha is the dispenser of success who overcomes obstacles and helps others to do the same, hence the additional name, “lord of obstacles”.

He is also invoked to protect travel, as a good luck charm in any initiative. He represents a solid anchoring force and that’s the reason why it is linked to the root chakra.

In India, you will hear less of Brahma, much more of Vishnu, Ganesh, Shiva, Kali and so on. Yet this God, at the head of the Hindu Pantheon, belongs, together with Shiva and Vishnu, to the Trimurti, the triad of supreme deities that includes the gods to whom we owe the creation of the world and its creatures. Brahma is specifically linked to the preservation of the world.

Vishnu, however, is related to competence, and the destruction of the world in order to recreate it is the role of Shiva, all in an eternal cycle without beginning or end that is realized through an incessant succession of cosmic events. Brahma released the primordial waters and fertilized them; he revealed himself from the cosmic golden egg where he resided; the celestial world originated from the upper part of the egg and the earthly world materialized from the lower part.

Also read:
A List of 4 Deities That are Associated with Water [With Stories]

Thus, all the elements of the cosmos were manifested. Being the sacral area, these deities are connected with our sexuality and “creation”, so Brahma is the best way to represent the energy behind this chakra.

Vishnu is one of the three supreme deities worshiped by the three main forms of Hinduism; the different aspects of his religion, very vital and diversified up to the present day, are the result of the fusion of divine characters and originally distinct cults, documented starting from the 4th century BC.

Vishnu is the personal ruler of the universe, which he creates, preserves, and destroys.

He represents the supreme being itself, the Absolute and magnanimous which is both transcendent and immanent at the same time. It is not for nothing that Vishnu etymologically means “one who resides within everything”. Vishnu is closely linked to the phenomenon of avatars, the embodiment of the absolute in human form to protect the dharma and cyclically save the world from darkness.

The god Rudra has a scarlet tinge, is sprinkled with “white ash of what fire devours” and has three eyes. Rudra, or the god Shiva, the dissolver of the universe, is represented here as an old man with a vermilion complexion, sprinkled with ashes, with three eyes and two arms, hands posed in the gesture that dispels fear and bestows gifts, sitting on the bull Nandin, his mount.

Rudra annihilates desire by reducing it to ashes, the ashes from which the divinity is adorned, a symbol of immortality, of the last stage of matter.

We pray to Rudra to make our mindfully aware and able to completely transcend the senses and to awaken our intellect. The god Rudra is associated not only with the ability to control the senses (for which Indra provides) but also with the ability to transcend them completely. Rudra as a form of Shiva is conclusion or annihilation, and its influence allows us to completely exhaust the process of desire which is continually fed by the projection of the five senses to the outside world.

The word Rudra can also be broken down into “ru”, the root of disease, and “dra” which means the destroyer.

Therefore, Rudra is the one who destroys all the evils of life. Rudra resides in our heart as the jyotir lingam: the linga of fire, the first manifestation of Shiva, the essence of splendor. Some researchers associate Rudra with the “thousand-petalled lotus”, Sahasrara, where Rudra creates an extraordinary delight, vibrating all the nadis and releasing Ananda, “pure bliss”. Rudra thus shows himself as Shambu, the great benefactor.

Isvara is all about letting yourself expressing yourself. When we have understood the essence of the word Universe, of the Self, and of the Eternal Truth, then it will be easy to understand that the Eternal Truth is the supreme power of the Universe.

This deep understanding will lead us to pay attention to that indefinite “something greater”, and this attention will bring us close and in the union. As this awareness grows, it becomes natural to develop devotion, and it is this devotion that will lead us in a simple and natural way to surrender to the Eternal Truth. 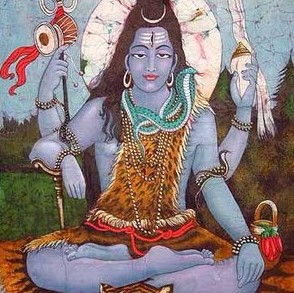 Shakti Hakini is an androgynous deity representing both the feminine and the masculine and this duality is what connects this deity with the Third Eye chakra.

Shakti Hakini establishes the connection with the spiritual world, promotes intuitive knowledge, and places the accent on the reality manifested following the overcoming of the dualistic perception of the world and the pacification of thoughts. Within this higher reality, telepathic faculties develop and phenomena such as premonitions or the intuitive understanding of others have often been encountered.

A further theme concerning the Ajna Chakra is self-knowledge. Experiences with the “third eye” are often described as experiences of light, moments in which the eyes really open for the first time.

Shiva in the Trimurti is known as the god of destruction, the god with 1008 names including Mahadeva (the great god), Mahesh, Rudra, Neelkantha, and Ishwar, the supreme god. He is also called Mahayogi, the great ascetic who represents the highest form of austere penance and high meditation, which leads to salvation.

In Shivaita tradition, Shiva is seen as the supreme being whereas in Smarta tradition he is seen as one of the earliest forms of the God.

As the Crown Chakra allows us to get in touch with the divine, Shiva perfectly suits this role representing this chakra.