In esoterism, the Peacock is a symbol of wholeness, because it unites every color its unfolded tail. It indicates the identity of the nature of all manifestations and their fragility because they appear and disappear with the same rapidity with which the Peacock takes sides and folds up.

Even the myths about it are connected to the natural cycles of life and death. But which are the deities associated with peacocks?

Let’s find out together with this article.

4 Poweful Deities That are Associated with Peacocks 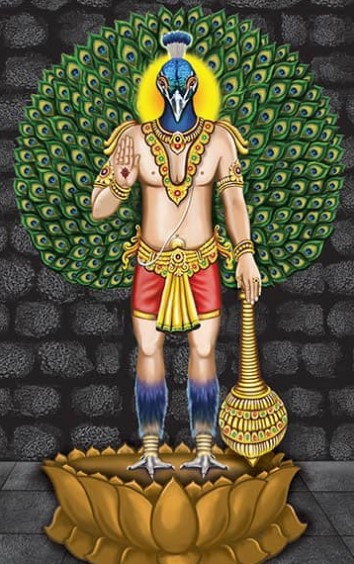 Mayura is a Sanskrit word for Peacock, which is one of the sacred birds in Hindu mythology. It is mentioned in a number of scriptures. It is also a contemporary Hindu name used in many parts of India. Legend states that Mayura was created from the feathers of Garuda, another mythical semi-divine bird from Hindu mythology. Garuda is identified as the vahana (vehicle) of Vishnu, one of the Trimurti.

In the images of Mayura as a mythical bird, he is depicted killing a snake, which according to a number of Hindu scriptures is a symbol of the cycle of time. There are many deities accompanied by this sacred bird. In Hinduism, the peacock was a favorite of the gods.

Kartikeya, the Hindu god of war and son of Shiva and Parvati, uses the peacock as his vahana steed. The peacock’s most famous iconographic association is with the god Krishna brandishing the peacock feather of his headdress. The peacock is also associated with Saraswati, the goddess of wisdom and music.

Peacocks have strong roots in Buddhism as well. This is because they are a symbol of patience, enlightenment, and strong values. Regarded as a symbol of wisdom, often the peacock is a representation of Buddha itself but there is more!

In some pieces of art, we can find Buddha as a peacock together with two other peacocks on either side of him that refers to two of his first disciples.

Hera, daughter of Cronus and Rhea, was born on the island of Samo or in Argos and was hidden in Arcadia so that her father would not devour her; the Seasons were her nurses. She grew up sweet and beautiful, with perfect skin, deep eyes, silky hair. Everything that lives on earth was sacred to her, but her favorite animal was the peacock, a solar symbol. Originally from India, he crossed Babylon, Persia, and all of Asia Minor to land in Samos, to reach the sanctuary of Hera.

In all the countries he crossed, the peacock distinguished himself for his ability as a ruthless hunter of snakes, so much so that it was believed that by assimilating and transforming their poison, the peacock produced the iridescent feathers of its tail. Its flesh, considered incorruptible, was given to the sick as medicine. According to the legend, Zeus fell in love with Io, a young and beautiful priestess of the Argive Era, thus unleashing the ire of his divine and jealous consort.

To save her from his revenge, Zeus transformed Io into a shining heifer, but Hera demanded – as a demonstration of fidelity – that she be consecrated to her and placed her in the custody of Argos of the Hundred Eyes. He was a descendant of Zeus, endowed with prodigious strength, but above all, he was capable of seeing in all directions and of sleeping with his eyes half-closed.

To restore freedom to his beloved, Zeus charged Hermes to neutralize Argos: different versions of this myth state that Hermes either killed him or put him to sleep with the sound of Pan’s flute or with his divine wand. As a sign of gratitude for the help received, Hera immortalized Argos in the constellation of the Peacock, placing her hundred eyes on the bird’s feathers sacred to her.

The peacock appears very early in early Christian art as a symbol of the Resurrection and Eternal Life. This symbolism is rooted in ancient pagan religions, some of which believed that peacock flesh never decayed after death.

The first Christians, therefore, adopted it as a symbol of the Resurrection, the glorious and eternal existence of Christ. In medieval times, it was thought that the peacock lost its feathers annually and that the new ones were always more beautiful than the previous ones. Along with this idea, some medieval legends supported the theory that the bright colors of the peacock’s feathers came from a special diet. It was believed that the peacock could kill and eat poisonous snakes, absorbing the venom and turning it into the colors of their feathers.

Also read:
A List of 4 Deities Associated with Snakes [With Stories]

This belief also contributed greatly to the peacock as a symbol of Christ’s Resurrection, since Christ “became sin” (2 Cor 5:21) for us on the cross, but then rose from the dead with his glorious body forever bearing the wounds inflicted by man.

Regardless of the biological correctness or non-correctness of these traditions, they help us understand why Christian artists often used the peacock as a symbol of Christ and his resurrection.