The Rabbit and the Hare have always been represented as elements of luck or misfortune by many ancient and modern cultures. Let’s learn more about the meaning of a rabbit as a spirit animal, dream interpretation, and more.

Meaning of a Rabbit in Esotericism

There are many meanings related to this animal, such as abundance, comfort, vulnerability, fertility, desire, and procreation. The rabbits are also extremely connected to the seasons, to the changes of the mother earth and especially to the spring. They, in fact, feel the beginning of the spring in a very intense way, as if it were a real celebration of life.

In ancient times, it represented a source of youth, a cause of serious psychological illnesses, a sign of an immense disaster (for example, if it was in the mining sector or at sea) or was, and still is, a symbol of impetuous sexuality.

This sweet animal has so many different symbols. It is amazing to learn more about these symbols so we know how to interpret our dreams when we see a rabbit in them or use them as a way of self-introspection when we cross paths with it.

Symbolism of a Rabbit in Different Cultures

Native American mythology has many references to this animal. In fact, its meat was forbidden in some places because it was believed that warriors could assume the animal’s timidity (lack of courage). On the other hand, the skin was widely used, especially for the production of amulets and ornaments.

Later on, these amulets and ornaments were applied on the hunting instruments because it was thought that will make the arrows faster and the warriors will be more cunning. These peoples have numerous legends that tell stories of the Rabbit’s superiority and cunning. They also tell how it became the symbol of the Moon by defeating fearsome adversaries, such as nocturnal birds and bears.

The Native American tribes also had another representation of this animal as a symbol of passionate love. For which, often during the festivities men and women joined in the so-called “Dance of the Rabbit”.

The ancient Egyptians presented the god Osiris with the head of a hare. In Greek mythology, the rabbit was a symbol of Aphrodite (goddess of love and sex). In ancient Rome, it was believed that the Rabbit’s meat fought female sterility and that the testicles favored conception.

The Celts, the Mayans, and the East

The rabbit was the sacred animal to the goddess of Victory for the Celts. The Mayan and Aztec civilizations present this figure as a symbol of the Moon. For the later, sunspots were nothing but Rabbits thrown to the Moon by gods and it was believed that hundreds of Rabbits watch over the crops at night.

In the Mayan culture, a legend tells that the goddess Luna was saved by a Rabbit. This salvation is equivalent to the salvation of the entire cycle of life. They also associated this animal with love and medicine.

In China, the Hare predominates. It’s presented by both the fourth animal of the zodiac and as a symbol of longevity and fertility. The Hare is the protector of all the wild animals and the color of its hair is associated with favorable events; white indicates immortality, black indicates professional success, and red is equivalent to luck in general.

In Japan, the rabbit is a living sacred monument that safeguards the species. In Africa, it is considered a sacrificial animal. While in India, the deity corresponding to the name of Bodhisattva has the appearance of a Rabbit.

Hares and rabbits represent the element of earth; living underground gives them that symbolism. While being associated with small people is a symbol of hidden knowledge.

Part of this statement is related to the reproductive capacity of hares and rabbits with the covens of witches and sorcerers; orgiastic encounters of ancient tribal beliefs of fertility that went against Christian belief.

The fear of hares and rabbits has changed over the centuries and today they are seen as a symbol of Easter (spring or rebirth). So when the rabbit leaves chocolate eggs to the children – the egg we remember is a symbol of the beginning of things – we are remembering ancient myths of death (winter) and resurrection (spring).

There are some beliefs in certain European parts that the black rabbit is a creature of witchcraft. Hares and rabbits were the favorite companions of witches.

This inspired the belief of the powers or luck that a rabbit’s foot can give to the one who possesses it.

Also in other cultures, rabbits were represented as divine creatures accompanying goddesses such as Aphrodite, Cerridwen, and Freyja.

Some esoteric beliefs say that white rabbits symbolize faithfulness, that is, the person who has dreamed of the rabbit is faithful in love.

It is also given the same meaning if another person is holding the rabbit, for example, if you dream that your partner carries a white rabbit in his/her arms, means that he or she is faithful to you.

They can also have other meanings such as fertility or rapid adaptation to any situation in life.

Have you heard the phrase “Follow the white rabbit”? This is a reference to Alice’s rabbit in Wonderland and is used in the movie “The Matrix.” This phrase summarizes what this character can mean based on literary work. The white rabbit is a symbol of the spiritual and physical guide. It is a being who wants to show us something, or at least that is the meaning they give us in the book written by Lewis Carroll. 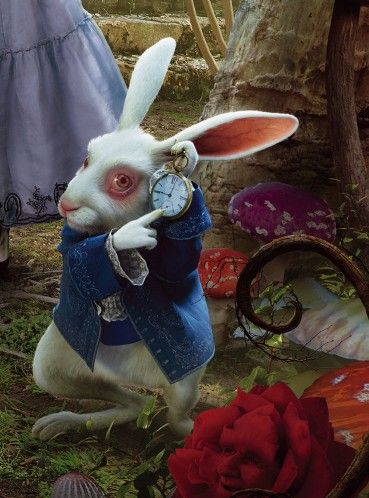 Spiritual meaning of rabbits in dreams

Dreaming of a rabbit leads the dreamer to confront himself/herself with a powerful symbol: a fear that a dreamer will be (or is it already) confronted with his/her fears and vulnerability.

And it is precisely the tenderness, sweetness, and defenselessness of this animal in dreams that brings out the theme of vulnerability, naivety, and childish curiosity.

Perhaps the dreamer must bring attention to similar qualities that are surfacing in his/her behavior (or in a person close to him/her), and dreaming of a rabbit can then indicate what scares him/her and highlight the parts of his/her most fearful personality in front of what it’s happening.

What if a rabbit crosses your path?

Just as some people fear black cats crossing the road, the passage of a rabbit in front of the traveler is a sign of good fortune, but if you cross the road after the rabbits’ crossing is considered bad luck.

When we need spiritual guidance, we can turn to these animals, which for ancient Native Americans, are the beings that are sent by nature.

At each stage of life, there are one or several different animals that serve us as teachers and are presented to us in various situations so that we can understand their message through their presence. Each of these animals is presented in the form of a totem so as not to forget their message and always have them as protectors.

It is a totemic animal that is associated with fear, sweetness, and fertility. When it presents itself in our lives, it wants to show us that we must be more alert and that sometimes it is better to take some distance and interpret the environment in which we live without rushing.

It can also show us the need to be more pleased with our society, move more naturally, and observe to anticipate.

Another teaching that can give is the rabbit as our totemic animal is its quick reflexes and trust in its instincts.

The fear that the rabbit represents reminds us that it serves to overcome obstacles, to survive, and to be cautious. The sweetness of the rabbit teaches us to be faithful to our loved ones, to remain safe, to take care of others, and fertility. It also reminds us of the need to be close to the family and to think seriously about whether or not it is time to have offspring.

A rabbit talisman is related to good fortune and having the ability to get out of any situation. If it is our totemic animal, it will protect us and teach us to follow our instinct, intuition, and speed.