If you also do not believe in superstitions but have been put to the test by 2020, you will agree with me that, in order to avoid 2021 being a bad copy of the previous year, it is necessary to bring out all the lucky charms you own and put into practice.

Maybe you are thinking, “But I’m not superstitious anyway;” but, then, how it is that if a black cat crosses your street, you turn your heels and go away?!

I don’t think that giving a new year ritual a try while respecting some superstitions is a negative thing.

I will definitely give them a try!

If you believe in superstition, you will know that there are numerous folk traditions around the world whose New Year’s rites ensure luck and infuse positive energy into the new year that is coming.

And who cares if you think that all this is crazy and useless, after all, what have you got to lose? Nothing, so arm yourself with good vibes and trust, with the hope that that “Merry Christmas and Happy New Year” can finally be prophetic.

Superstitions to keep in mind for New Year’s Day

Keep an eye on the weather

Crying on January 1st instills a sad and negative mood throughout the next 12 months, so no matter how much you drink, how much the movie you watch moves you, or how sad you will be because the guy you like didn’t kiss you under the mistletoe, you don’t have to shed a tear, okay?

On New Year’s Eve, you wake up early

Yes, usually on January 1st you get up when the sun is high in the sky and at times, you snooze so much that the moon has already appeared on the horizon.

For this year we turn the page and we wake up at dawn. In fact, according to a Polish tradition, getting up early on New Year’s Eve will make you wake up to the crowing of the rooster (and without the slightest effort) for the rest of the year.

Come on, this way you’ll have a lot more time to do what you want, right?

Kiss someone at midnight

Surely in past years, you have already kissed someone at the stroke of midnight. After all, this is the only time of the year when you have the excuse of kissing someone you like without having to justify yourself too much, so why waste the opportunity by staying dry?

But the superstition of the midnight kiss is actually much more romantic than that and says that if you kiss someone who gives you goosebumps at midnight on the dot, then your love will last all year (and also much longer).

Bring an empty suitcase with you

If your dream for the next year is to travel the world (lockdown permitting), giving free rein to your desire to discover new cultures and new countries, know that on New Year’s Eve in Colombia, people go around with an empty suitcase which, according to ancient superstition, would ensure a nice trip within the year.

Well, at this point, why not give it a try?

Lentils are one of the ingredients that we all find on our plate during dinner on December 31st because, as our grandmothers told us, they bring money and wealth. The extra tip then is to combine them with black cabbage, which would further amplify the luxuriance and revenues of the coming year.

You never know, if you eat lentils, in 12 months, you could be in your super armored warehouse diving into a sea of gold coins, just like that rich man Uncle Scrooge does.

Ok, after having kissed your crush under the mistletoe, it’s time to eat 12 grapes (one after the other) just like they do in Spain, where they are said to bring good luck. Given that this is super feasible, it could always have been worse.

Imagine if I had to eat 12 Brussels sprouts in less than 20 seconds, that would have been terrifying!

According to the ancient Chinese tradition, on New Year’s Day, you should not clean the house, as removing the dust or sweeping the floor would literally “sweep” away the good luck and the good vibes that would have been attracted by the celebrations and decorations dedicated to the new year.

Make sure your wallet is full

“Full wallet on New Year’s Eve, full wallet all year round!” Yes, of course, certainly not so little is enough to guarantee you a future where banknotes sprout like mushrooms; having said that, however, if this simple gesture could only be a good omen for some small extra income, why not?

If lentils (but also the legendary 12 grapes) cannot be missing from the New Year’s menu, lobsters and chicken must absolutely not appear on the table. The reason? The chicken, being a bird, would make luck “fly away”, while the lobsters, walking backward, would not make you move forward in life, preventing you from achieving the goals you have in mind.

Take out your red underwear

Here, too, we play at home as the Italian tradition “requires” us to wear red underwear on the night of December 31st as a good omen for passionate and hot relationships. Is your love life more chaste than a newborn dove?

From around the world

In Spain, 12 grapes are eaten at midnight on December 31st, one at a time at each toll of the bell. Those who eat them all will be blessed with luck in the new year.

In Poland on New Year’s Eve, it is customary to wear new underwear, but it is essential not to remove the label! The new linen brings a lot of luck in love for the coming year.

Those who want to be blessed with luck in the new year will have to eat pea soup on New Year’s Eve. Also, by tradition, it is a good omen to keep 7 pomegranate seeds or a bay leaf in your wallet.

In Germany, tradition has it that on the night of December 31st, delicious krapfen, German fried donuts usually filled with jam, are eaten. Among the many, there is one stuffed with mustard! Whoever finds it will have a lucky year. 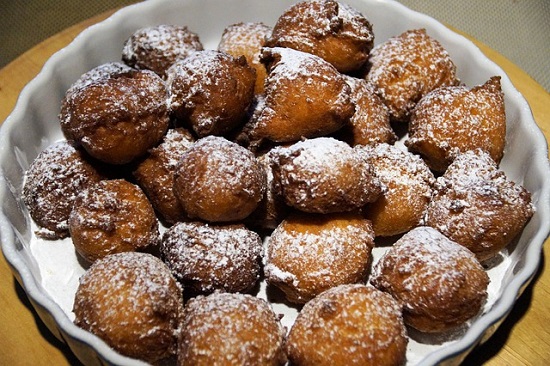 Rule of the “Gui de l’An Neuf”: whoever kisses at midnight under the mistletoe will have prosperity and well-being in the future. Moreover, the couples who do will be destined to get married in the new year.

To celebrate the end of the year, Brazilians wear white clothes with the hope of attracting happiness into their lives. They also pay homage to the water goddess Lemanja by throwing flowers into the sea in her honor.

In Turkey, at midnight, all the taps in the house are turned on. The flowing water is synonymous with blessings and wealth for families in the new year.

Peruvians traditionally burn a muñeco, a puppet similar to a scarecrow that symbolizes the old year. The doll is made of flammable material, sometimes also stuffed with fireworks, then set on fire at midnight.

The new year begins at midnight with 108 tolling bells. This symbolizes 108 wishes and 108 bad things that happened in the past year that are canceled one by one with each toll of the bell. 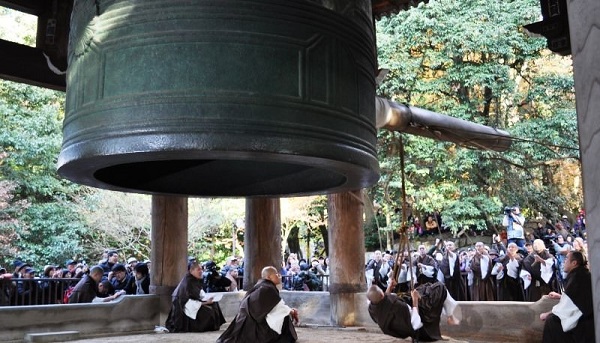 In South Africa, among the most curious rituals and superstitions for your New Year’s Eve, it is inaugurated on January 2nd with the beginning of Carnival. On this date, we commemorate the “Day of Emancipation”, in which 1830 slaves were freed in South Africa.

Your Spirit Guide is Trying to Contact You [Watch These Signs]
Next Post: Here’s How to Make Moon Water [The Witchy Way!]