A little about the Juniper tree

Juniper grows naturally in Europe, Asia, and North America, both in mountainous areas up to heights of 2500m above sea level, and in milder habitats occupying uncultivated places, heaths, arid pastures, or bushes near marine areas. In fact, it is present in all temperate regions of the northern hemisphere and has the widest distribution range compared to any other woody plant.

In addition, it spread from the Arctic regions of Asia, Europe, and North America to the south to around 30°N latitude, although some studies have reported that natural populations have settled in the southern hemisphere. It grows well in areas where beech and chestnut trees live, prefers well-drained, light soil, but also bears dryness and a little alkalinity. 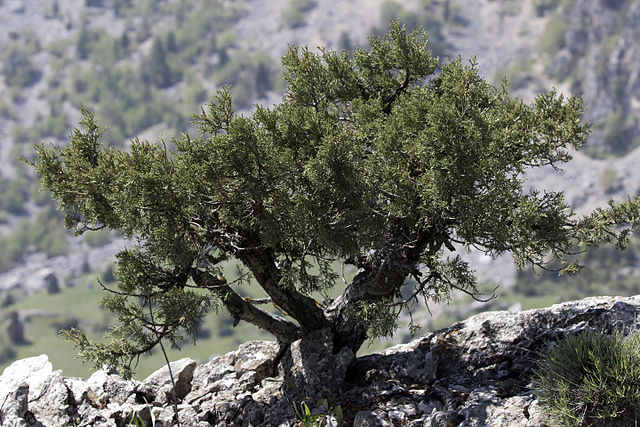 It is also typical of the Mediterranean area where its unmistakable scent spreads among the indigenous vegetation of European and North African countries.

Symbolism of the juniper tree

Juniperus comunis, a tree belonging to the Cupressaceae family, can boast a long pagan and Christian tradition in its use. Its meaning is linked precisely to these varied stories that we will tell you. By translating the secret language of plants into one that is understandable to humans, we can speak of rescue and protection.

This is because, appearing in any tradition, it has strengthened what was its Greek meaning. In this beautiful language, this plant is known under the name of “arkeuthos”, from the verb “arkéo” which means “to repel the enemy”. Its physical characteristics, accentuated by thorny branches, gave this idea of ​​protection.

These trees were planted in many ancient countries to protect the house from evil spirits and malicious men.

People even went so far as to use it in the cracks in the house, hoping to reject diseases and evil spirits. In Italy, the symbolic tradition of it has always been very strong; there was no house where its branch wasn’t used against witches and sorcerers. Juniper and its language occupy a place of honor even in many Christmas legends, but the prettiest is perhaps one of German origin, which teaches how, according to a particular ritual, it could recall a beneficial spirit capable of forcing thieves to return stolen items.

In Christianity, this tree is linked to the protection of the Holy Family in their escape from Herod and to the establishment of the Cross of Christ (although this “task” seems to have been attributed to several trees according to tradition, editor’s note). Whatever the tradition taken into consideration, it is clear that this plant is synonymous with protection.

In Estonia, they were planted next to houses to keep negative spirits away and the cracks in the walls were hit with its branches to prevent them from sneaking in, bringing disease and misfortune. Twigs of the plant were hung in the mountains of the Pistoia area at all doors to prevent witches from entering the house.

How was this plant used over history?

This plant, which does not seem to invite contact, and can show an “excess of pungency and heat”, has in its essential oil an excellent remedy both in cosmetic application and in general well-being. From a symbolic point of view, its repelling points could be read not so much as a refusal of contact, but as a defense—in this sense, the plant has always been associated with the idea of ​​protection and durability.

In many ancient Indo-European cultures, it has been attributed a symbolic value of strength and protection against evil people, but also of metaphysical creatures such as evil spirits and diseases.

Promoted as a universal panacea, the juniper bath freed people from sloth and the body from rheumatic pain. This plant was also used to combat depression and restore strength to exhausted people. On ulcerated wounds, it caused a repairing effect that leads to healing.

Being an evergreen, it was used in fertility rituals. According to tradition, its berries are said to be an aphrodisiac.

Use it to protect the home, ban people and negative entities, ward off sadness, propitiate luck, increase sexual vigor in men, and recover strength and determination.

The fumigation of the rooms with juniper wood was also commonly practiced, for the following purposes:

Some customs practiced by the populations of the alpine villages have handed down the tradition of doing fumigations with juniper in the stables on the 1st of May to protect livestock from negative entities and diseases.

In addition, the custom of burning juniper wood was widespread, because it was believed that its fragrant fumes had therapeutic properties against germs to protect sick people and those in need of some special protection, both physically and spiritually.