Mother Nature astonishes us with beauty, and she didn’t disappoint when she created beautiful, charming blue butterflies. Let’s learn more about blue butterfly symbolism and meaning!

How is Blue Butterfly Connected with Esotericism?

Although it may seem incredible, many species of butterflies around the world are blue, but they are very rare. That is why there is a lot of mysticism around their existence.

For many religions and cultures, these butterflies have a special meaning and power, which is why beliefs have always supported the legends around these beautiful insects. 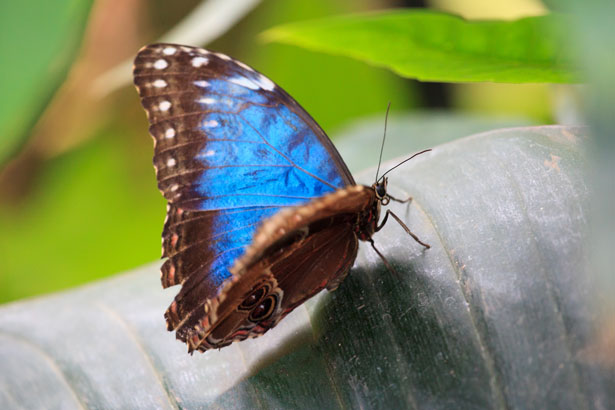 In the matte blue color, iridescent, bright, with a black border, different shades of blue adorn the wings of these spectacular species that, according to the meaning of the blue butterflies are believed to fulfill wishes to those who have the honor of having them nearby.

The meaning of the blue butterfly is complex.

A blue butterfly is often considered a sign of life. The blue butterfly symbolizes acceptance, honor, joy, happiness, and high energy in most cultures.

Scholars who have researched everything about this type of butterfly mentioned that its name Morpho means change, modification, and transformation.

The blue butterfly can symbolize the passage of time, change, and the meaning of life.

Part of their symbolism indicates that they bring good luck, so as always mother nature won’t satisfy everyone and give them a chance to observe them.

Seeing a blue butterfly or keeping it in the palm of your hand can have a calming effect on a person. In some parts of the world, blue butterflies are rare, so the person who recognizes one is extremely lucky.

The blue butterfly symbolizes the spirit that speaks through transformation and change.

Blue butterflies are considered carriers of desires. Identifying a blue butterfly means that a wish will come true.

In addition, in many cultures, this species is regarded as a component of luck for those who encounter it or visualize it.

Legends About a Blue Butterfly

A legend tells that an older woman had her eldest daughter who eagerly wanted to have a child many years ago.

However, she had had some health issues, so she had all kinds of treatments that didn’t help.

Again and again, she tried the suggested practices, eat strange mixtures, visited healers and professors to educate herself, and nothing seems to help.

The older woman said:
“My daughter couldn’t sleep. She was nervous, there was no advice to help her ease her grief, and she also felt guilty for not being able to please her, husband, and her husband’s family who also asked for a child to continue the family name.

She was exhausted from the people around her.

One hot afternoon, the older woman visited her daughter in the hacienda where she lived with her husband on the outskirts of the province of San José, in Costa Rica.

Sitting in the backyard of that large house, her daughter began to talk with her mom about everything she went through – unsuccessfully.

Suddenly this older woman noticed in the distance a butterfly.

She immediately stopped listening to her daughter to watch this beautiful creature – a blue butterfly.

The butterfly flew over both times several times.

The daughter didn’t notice it immediately because she was worried about her troubles until this beautiful insect had landed on the back of the chair beside the coffee table where they were talking.

Everything suddenly became silent. The daughter looked at the mother with tears running down her cheeks and could barely speak.

“Mama, what does that mean?” she asked.

Both were astonished by such a majestic spectacle and felt that this meant something… something miraculous.

The butterfly with a surprising blue hue flew in the direction of the wind until it disappeared across the horizon among small bushes of orange flowers that the young woman was growing by herself.

At that precise moment, the house’s phone rang, and when the daughter answered it and listened to the message, the girl started crying.

It was the nurse, in charge of the treatment she was undergoing, and she said that she is pregnant.

“Renaissance my dear, a new time of your life begins”, were the words in that precious moment of the young woman who had already lost hope.

From that day on, she began to draw blue butterflies on the walls of her child’s room so that her child would also love this creature.

What if a Blue Butterfly Appears in Your Dreams?

Usually, it means that your deepest wishes can come true. If you visualize an impressive butterfly of deep and bright blue color in the dream, it indicates that something pleasant is about to happen.

This blue butterfly foreshadows that happiness is coming and that you will survive even though they are stuck in your path.

Remember that the butterfly symbolizes renewal, so your moment to shine will come.

So think about who you are and what you want out of life. Don’t do things lightly.

What if a Blue Butterfly Lands on You?

If a blue butterfly lands on you, you will embrace a new chapter of your life.

If you are struggling in some area of your life, you will see the light at the end of the tunnel sooner than you might think!