Palo Santo smudge sticks are widely used in both magic and daily life. But it might be very interesting to learn more about this practice when it comes to smudging and cleansing our spaces and bodies from negativity.

As Palo Santo can be used in different ways and has some special properties, it’s mandatory to know how to use it properly to truly let its magic happen!

Let’s see how to use Palo Santo smudge sticks, an amazing natural tool, to cleanse negativity and embrace positivity and light.

The discovery of the Americas gave us more than just tomatoes, corn, potatoes, cocoa, and tobacco. It is true that “Man does not live by bread alone”—we are not only biological machines that aim at the survival of the body by centering all existence on obtaining food and reproducing. 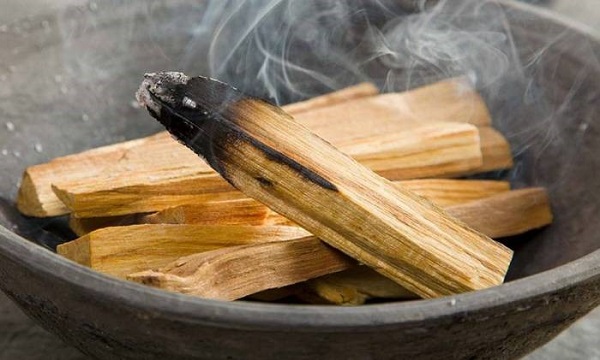 Another dimension dwells in us, deeper, emancipated from the laws of matter and life. Consequently, with discovering the soul and realizing that we are not only our body, other products of Mother Earth have also begun to attract the attention of the conquistadors.

The origins of the Palo Santo

Palo Santo is one of the products for ceremonial, esoteric, or spiritual use. This Spanish name that means “Sacred Wood”, the tree that responds to the scientific name of Bursera graveolens, is recognized in all languages.

Known to Europeans for at least two centuries, especially for extracting its precious essential oil, it grows spontaneously in Central America and parts of South America, up to the border between Peru and Bolivia. In its native lands, Palo Santo is not used to extract oil but mostly in the form of incense and to manufacture ritual objects.

Like the myrrh offered to the baby Jesus together with oil and gold, Palo Santo is now used in the world of alternative health practices, especially hatha yoga and the like, as a tool for cleaning the energy of the individual.

The procedure is simple and follows the method used by the Central American tribes known by the first explorers: it is burned, and the space is exposed to its fumes.

The mental and emotional calm that comes from its inhalations is said to be due to the power of smoke to drive away the negative energies that surround us. Palo Santo smudge sticks are also used often in some propitiatory rites, which according to European mental schemes we could define as “white magic“.

Palo Santo smudge sticks are used above all to attract luck and love and to give a positive change to one’s life, leaving behind what does not really belong to us or represent us, to begin a life more in conformity with one’s soul.

The very pleasant fragrance of Palo Santo is very often used in rituals that involve the use of entheogens. So, let’s talk about Ayahuasca, psychedelic mushrooms, mescaline cacti, and salvia divinorum.

The effect of Palo Santo oils that enter us through its fumes would have a function similar to that of sacred music, that is, to connect us to the inner source of all harmonies and all healings. In fact, in the Mesoamerican esoteric heritage, as well as in the East and in ancient Europe, the Divine is within us.

We too can exploit the potential of this natural incense.

Also read:
What is the Purpose of Smudging? [Finding the Right Herbs]
Can Smudging Make Things Worse? Can it be Dangerous?

If you used Palo Santo smudge sticks to cleanse your space and yourself but nothing happened, maybe you need to try something different! Why not rely on my spell casting service? It’s easy, effective, and convenient!

Check out my shop and choose the right spell for you! If you want to learn more about a situation and gain insight into your life, order a tarot reading from Mystic Amber! We are here to help!

What do Witches Carry with Them? [+ A Picture of My Bag]
Next Post: Here’s a Money Drawing Oil Recipe [Step-By-Step]