Magnolia is one of my favorite trees, as I had one in the garden of my childhood house. My grandma always told me that tree was there to protect us and I had so many memories related to this tree!

Let’s dive into it so next time you see a magnolia tree, you will know exactly what it means and its highly powerful symbolism.

Magnolia owes its name to Pierre Magnol, a French physician and botanist who introduced the notion of family in botanical classification. It has very ancient origins and can be found in different parts of the world, from America to Asia.

It is a kind of plant belonging to the Magnoliaceae family, which includes over 80 arboreal and shrubby species. Native to North and Central America, they can exceed 20 meters in height. 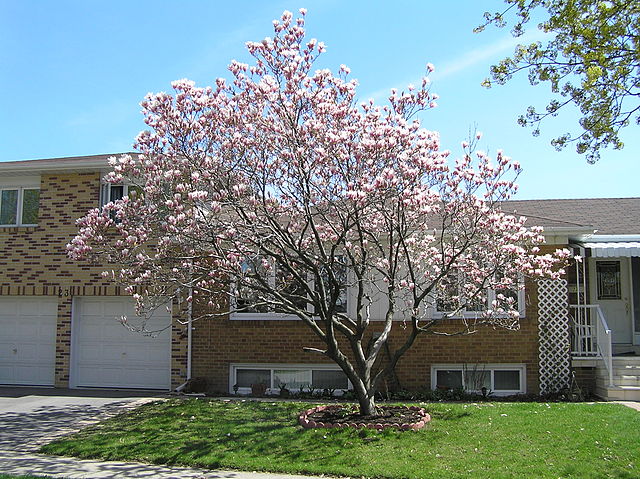 They have an alternate oval or elliptical leaves. Perennial and deciduous, they appear in a dark green color and are very leathery.

Its flowers are large, showy, and white or pink in color with an intense fragrance. They are cup-shaped with a perianth made up of 6-9 petals called petaloids (where petals and sepals have the same appearance).

This made botanists believe that it was a primitive flower. For this reason, in the past decades, it has been erroneously believed that the Magnoliaceae were the first angiosperms to colonize the earth.

Magnolia trees have been on earth for millions of years, shown by what recent archaeological excavations in America have brought to light, that some fossil specimens date back to five million years ago.

The first specimens imported into Europe were grown in a greenhouse because the plants were thought to be very delicate; however, it is said that some French gardeners thought that keeping majestic trees in a closed environment was an act against nature, and they decided to plant a specimen at the center of a large garden.

According to a legend, it was the first plant grown outside that became the largest and most majestic in all of Europe, living for over 100 years.

According to a Japanese legend, it is advisable not to sleep or stay too long under a blooming magnolia tree, since the intense perfume of its flowers could stun or even kill.

In folk medicine, the flowers and bark resin, being rich in vitamins and minerals, were often used to soothe rheumatic problems, while the buds of magnolia officinalis were used as anti-inflammatories.

In the language of flowers and plants, the magnolia takes on two different meanings based on the color of the flower.

Each type has a specific meaning!

Tradition also has it that if you have it and it blooms out of season, it is to symbolize your anxious state. Giving a magnolia means, in the language of flowers, to believe the person to whom you are giving it is strong, dignified, and persevering.

From ancient to modern times

It was introduced to Europe only in 1740 by a French merchant. Present on earth for millions of years it symbolizes strength, longevity, and purity.

In China, people believe that planting one in the garden ensures luck, prosperity, and marital happiness. According to feng shui, placing one in the front of the house promotes a happy life full of pleasures while cultivating it at the back of the home favors solid financial well-being.

In Japan, brides, on their wedding day, used to adorn their bouquets with white magnolia flowers to represent the strength and purity of their love. 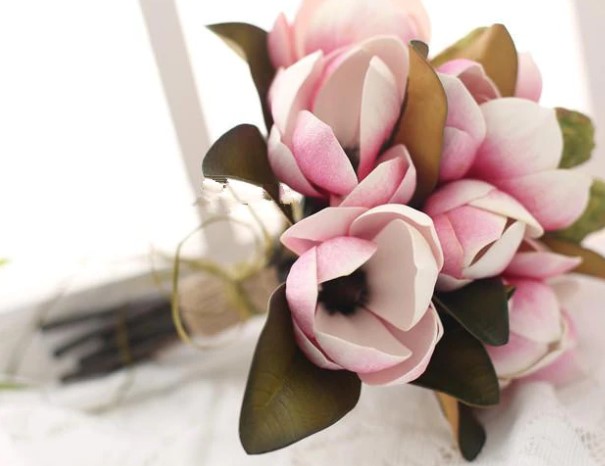 Even today, its petals are considered talismans useful to protect couples and increase passion.

In Europe, if a man betrayed his partner or returned to her after leaving her, he would have had to give her magnolia flowers to make up for the wrong, indicating the purity and nobility of his intentions.

This plant, closely connected to yin energy, embodies both fruitfulness and the courage to resist adverse situations (it grows in arid and inhospitable soils); therefore, it is particularly suitable for protecting women.

They vary in shapes and colors, but they are all splendid: they invite us to be tolerant and to be able to grasp the beauty in diversity.

Magnolia as a natural remedy and magickal ingredient

It contains two phenolic compounds, magnolol and onochiol, which, in addition to being an effective anti-inflammatory, antimicrobial, and antioxidant agent, constitute a valid aid in reducing the states associated with psychophysical stress (anxiety, panic, and insomnia).

Its essential oil is used to find love for yourself and to relax. We can spread it when we feel the need to quell emotional confusion and make balanced decisions. According to tradition, putting a handful of dry leaves under the mattress guarantees a happy marriage.

To attract luck into your home you need to hang its seed pods on every door or window. Blow the dust obtained by passing a handful of magnolia leaves on your shoes to the mortar, which is conducive to luck and wealth (first let them dry).

In magic, you can use it to cast spells to strengthen passion, loyalty, luck, attract love, protect sentimental unions, promote emotional balance. 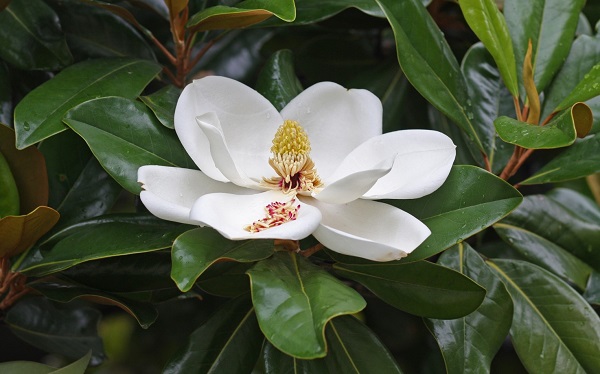 Beautiful legends about the magnolia tree

Many centuries ago, the bloodthirsty Hunhuzes attacked the inhabitants of a peaceful eastern village, burned houses, killed all those who could hold weapons in their hands—not only fit men, but also old men and boys. The cruel invaders left only a hundred beautiful girls for fun.

Every night the soldiers enjoyed themselves and, in the morning, killed a beautiful woman. This lasted exactly 99 days. When the last girl’s turn was to die, she prayed to the earth with a request not to let their gender perish forever.

In the morning the unexpected happened: the invaders did not see the bodies of those they had killed, because in their place there was a sprawling tree, whose branches were adorned with pink buds, of which there were exactly one hundred.

In anger, the Hunhuzes began to cut the tree with their swords, but as soon as a felled branch touched the ground, it turned into a new tree, all with the same hundred fascinating blossoms.

This was a magnolia, which is highly valued and called mu-lan in China. The flower is considered a symbol of female beauty, tenderness, and innocence.

In addition, the Chinese have another legend about the plant. The first tree is believed to have grown on the tomb of the ancient sage Confucius. In ancient times, only the emperor had the right to observe how it flourished, but if he wanted to, he could give this plant to his faithful servant.

The tree was often called the jade orchid due to the fact that it was distinguished by sobriety and the ability to survive the extreme cold.

In ancient times, there lived a very poor girl, Keiko, who was forced to make paper flowers that were so cheap that the poor woman did not have enough money for beautiful clothes. She lived in poverty when an old parrot once flew into her window.

The kind girl did not drive the bird away; so the bird revealed the secret: to revive the flowers, you have to drop a drop of your own blood on them.

But the parrot had warned Keiko that giving the last drop of blood was unacceptable. The beautiful girl followed the advice of the wise bird; her revived flowers were so beautiful that they began to be bought at a good price, and Keiko eventually came out of poverty.

She bought herself a luxurious kimono and went to the prom, where she met and fell in love with young Arthur, a student who seemed to reciprocate her love.

But alas, the young man was only interested in material goods; he dreamed of luxury and made his unfortunate girlfriend work harder and harder. Wanting to please his lover, he gave the last drop of his blood to the flowers and died. And the flower, when the last drop hit, became a magnolia.

How beautiful is that? All this information made me love this tree even more! I hope you enjoyed this article and you love magnolia trees as much as I do!