Are you curious to know something more about Futhark runes? In this article, we’re going to learn more about these mysterious ancient runes and their origins.

What are Futhark runes?

Futhark runes are part of the ancient northern alphabet. The alphabet is an invention of the Phoenicians. Later, this writing system was imitated by Greeks, Etruscans, and other Mediterranean peoples. So then how did it get to the Germanic tribes?

The general opinion of Scandinavian researchers is that the ancient Futhark has its origin in the Latin or Roman alphabet. Contact with the Germanic tribes resulted in the Proto-Nordic developing an alphabet of their own.

One of the proofs of this theory is the evident similarity between the runic alphabet and the Latin one. In fact, among its 24 runes, we can find characters almost identical to the Latin letters: r, i, b, or t, among others. 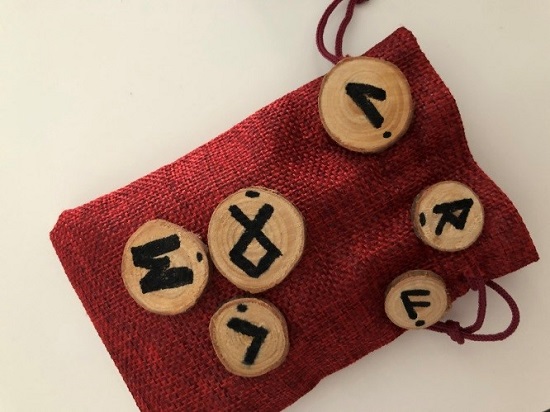 The runic alphabets include different variants of the writing system used by the Germanic peoples between the 2nd and 14th centuries AD. In turn, the word “runic” comes from the symbols that make up this alphabet and are known as runes. In other words, the runes are equivalent to the letters in the Latin alphabet.

The runes concept encompasses different writing symbols that were used by the Germanic peoples, giving rise to different alphabets over time. The word rune comes from the Germanic root run- and means secret or whisper.

The origin of the runic alphabet is a subject of debate among experts. Some theories say that it was influenced by the Latin alphabet or the Etruscan alphabet. According to other theories, it could have appeared independently.

Each rune represents a sound and can also represent the concept that gives the rune its name. There is also a rune-based number system.

The runic alphabet is also known by the name Futhark. This word is formed from the first six letters of this alphabet.

The knowledge of the runes has reached us today thanks to the engravings and inscriptions generally found on stone monuments. These findings have allowed us to deduce that the runes were mainly used between the 2nd and 14th centuries AD.

From the inscriptions found, a classification has been established between three main variants of the runic alphabet: Ancient Futhark, Anglo-Saxon Futhork, and Young Futhark.

As its name suggests, it is the oldest version of the runic alphabet. The oldest inscription found of this alphabet is the Vimose inscriptions, dated to AD 160. It is estimated that this alphabet was used until the 8th century. It ended up evolving giving rise to the Young Futhark, used by the Vikings, and the Anglo-Saxon Futhork, used by the peoples who inhabited Great Britain.

The Ancient Futhark is made up of 24 runes. Some of them bear a certain similarity to the Latin and Greek alphabets. This has given rise to different theories about the possible origin of this alphabet.

Anglo-Saxon Futhork is a variant of the runic alphabet that appeared as an evolution of the Ancient Futhark. It is believed that this alphabet began to be used in the Friesland region from the 4th century and, after a short time, among the peoples of Great Britain.

This alphabet was used to write Old English. However, from the 7th century it began to be replaced by the Latin alphabet due to the expansion of Christianity. It is estimated that between the 11th and 12th centuries, it ceased to be used completely.

The Anglo-Saxon Futhork introduced new runes over the Ancient Futhark, resulting in a total of 29 runes. Inscriptions with even more variations of the ancient runes have been found for a total of 33 runes in this variant of the alphabet.

The Young Futhark is properly the alphabet that was most used among the Viking people. For this reason, it is known in some contexts as the alphabet of the Vikings.

This alphabet emerged from the Ancient Futhark beginning in the 8th century. Whereas the Ancient Futhark consisted of 24 runes, the young futhark went on to use only 16. This rune reduction implied that there were runes that represented more than one sound.

To compensate for the use of fewer runes, a scoring system was developed that allowed different sounds to be represented from the same rune.

Over time, small variations of this alphabet developed. In the area of present-day Denmark, the so-called long branch runes were used. On the other hand, the peoples of the areas of present-day Sweden and Norway used the short branch runes. The Young Futhark was much more used among the Vikings than the Ancient Futhark had been among the earlier peoples. As a result, more than 6,000 rune-written inscriptions of the Young Futhark have been found.

The Young Futhark was replaced by the Latin alphabet when the Christianization of Scandinavia occurred from the 13th century on.

Starting in the 11th century, new variants of the Ancient Futhark appeared. Some of these were used for decorative purposes during the following centuries. Among them, medieval runes and Dalecarlian runes stand out.

Medieval runes formed an alphabet of 27 runes. Unlike the Ancient Futhark, in medieval runes each rune represented a single sound. These runes coexisted for centuries with the use of the Latin alphabet.

Viking culture attributed a divine nature to their writing. Two myths related to this issue have survived to this day. The first goes back to the origin of humanity. It tells how the god Ríg had three children by three women: Jarl (noble), Churl (free man), and Thrall (slave). When Jarl grew older and began to show signs of nobility, Ríg taught him the runes.

The other account, collected by the Swedish Archbishop Olaus Magnus in the 16th century, tells about a man named Kettil Runske who stole three sticks from Odin. These objects were carved with runes, and from them, he was able to learn to read and write.

The end of the runes

The Young Futhark was in use for three centuries, until the 1100s. Its limited number of letters did not cover all the phonemes of Old Norse, so new runes were developed.

The medieval runes (1100-1500) stand out, with new characters that coexisted with the Latin alphabet. In the Swedish province of Dalecarlia, on the other hand, a mixture of runes and Latin letters known as Dalecarlian runes (1500-1800) developed.

The advancement of Christianity led to an expansion of the Roman alphabet. Eventually, the runes were no longer used in favor of the Latin letters, so that the current languages Swedish, Norwegian, Danish, and Icelandic are written with this alphabet.

The use of Futhark runes in magic

In magic, we use Futhark runes for divination, as each symbol represents some kind of energy that might shape your life. They are great tools for your divination practice, and they are available in different shapes, sizes, and materials. You can choose the runes that you like the most, the ones you feel like are more in tune with your craft and represents you the most.

Where to get your Futhark runes?

You can create your own Futhark runes, but if this is not your thing, I highly recommend buying your runes on Etsy! That’s the best place to buy magickal tools and handcrafted items for your craft! Let your intuition guide your purchase and you will know what the best option will be for you!

Is It a Bad Omen to See an Owl? [Superstitions Explained]
Next Post: Dancing Candle Flame Meaning Explained [Movements]