There are 80 different species in the verbena family, but the one that interests the magic is the European one, called Officinalis. Let’s take a look at Vervain Magical Properties.

It is a perennial plant with delicate leaves and small blossoms. 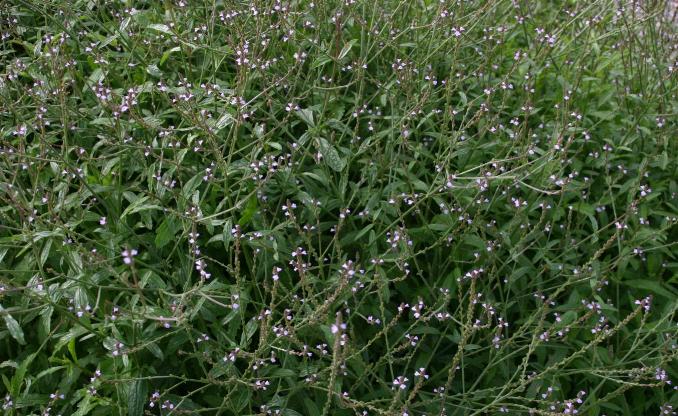 It has a square stem, with toothed leaves and flowers arranged like a thorn, it is used for divination, and clairvoyance. The plant calms the melancholy, warms and excites the hearts, and its sign of belonging is Aries and the planet Venus.

Vervain was one of the most well-known and widespread magical plants in ancient time.

Some derive its name from Venus thus highlighting the aphrodisiac properties, confirmed by Hippocrates (5th century BC) who recommends the decoction of vervain to cure the sterility of women.

Others, on the other hand, associate the term with the etymological “verber” whip, because its bundled branches served as a whip in ritual and propitiatory ceremonies.

Over time many names were given to this plant, including the devil’s claw. It was also burned to evoke spirits, to increase the prophetic and magical faculties.

In medieval times, people called it the magician’s herb.

Vervain was used as a talisman, and in ancient times the girls who were about to get married would wear vervain as a bunch of flowers, to have a great wedding night.

As a Love Magnet

In the past, the vervain (Verbena Officinalis) was considered very effective in love and sexual relationships.

It was said that to conquer the heart of the desired person, it was enough to touch it after rubbing the hands with the juice of this plant.

We take a vervain plant, shred it, rub the proceeds on a left hand, and with it, we mark a cross on the forehead.

Then we proceed to mark a cross on the loved one, reciting this formula:

“Catos, let your desire be agreed with mine, like that of St. Joseph with Mary, in the name of the Father of the Son and of the Holy Spirit so be it”.

The Romans even called it “Herba Veneris” and believed it could rekindle even the most dormant passions.

The banquet halls of the emperor Nero had ivory inlaid ceilings, the panels of which flowed to drop a rain of vervain and other perfumes, to increase the guests’ sensual and sexual satisfaction.

A Symbol of Peace

As a symbol of peace, it was placed in the sacred areas by the Latin priests, the Feiali, when negotiations were underway with both allies and enemies.

As an element of protection from the evil eye and the demons, they were cultivated at home, as Pedro Hispano himself, a doctor and future Pope John XXI (XIII century) remember.

A Great Tool for Rituals

Even the Salem witches used a vervain-based mixture to attract interested people.

The legendary Nostradamus suggested collecting vervain in the solstitial night, to prepare a talisman to carry out “good journeys.”

In the Bible of Magic, we find his ritual:

“For good journeys, take a branch of elder and get a stick from it after Pentecost.

Remove the marrow and, after closing one end, insert two wolf’s eyes into the other, tongue and dog’s heart, three lizards, three swallow hearts.

Fill with saltpeter and with seven vervain leaves collected on the night of Saint John, and a stone of different colors.

Close the hole with an ivory knob made from an elephant tusk that is no more than a year old, and finally, the stick is ready.

With it will be possible to undertake every journey without danger; you will avoid bad encounters, the bite of vipers, dogs, and wild beasts “.

Honestly a bit horrible as a formula for a peaceful journey!

The Druids used it to decorate the altars and added it to their lustral water.

The ancient German warriors called it “iron grass” and attributed the ability to remove negative influences to this little plant.

They sprinkled their swords with its juice, as protection from evil spirits.

An ancient Christian legend tells how this plant had sprung up on Mount Calvary, so the vervain was considered divine.

When picked up, a spell was formulated:

“You are holy, vervain, how you grow on the earth,
because at the beginning on Calvary you were found,
you healed the Redeemer and closed his bleeding wounds,
in the name of the Father, of the Son and of the Holy Spirit I take you”.

With these words, vervain was picked, for its magnificent healing virtues, and since then it also took the name of Sacred grass.

In the liturgy of the feast dedicated to the Assumption of Mary, the vervain was used for the blessing of churches.

On that occasion, the ritual of the consecration of herbs developed so that their healing properties were protected from the evil one and the powers of darkness.

A Few Powerful Tips to Get Started with Vervain

Vervain is traditionally used in protection spells and exorcising incenses.

Another way to benefit from its purifying and cleansing properties is to perform ritual baths with the plant or its essential oil, apart from eliminating negative energies from our body, it will help us sleep more relaxed and prevent bad dreams.

Vervain has been considered, since ancient times, a sacred plant for its magickal and medical properties and for this reason it is used, for example, to remove negative energies from the domestic environment, to prepare love filters and to cure many discomforts.

It can also be used in the water of the tub for an energizing and refreshing bath.