Would you like to attract money and you are tired of hoping? Maybe you heard about Santa Muerte, her powers, and how many people all around the world venerate her and ask her for miracles. Maybe you want to try it yourself. Let’s see then what the best Santa Muerte prayers are for money to attract abundance and wealth!

Santa Muerte, or the Santissima Muerte, is a figure of a Mexican cult who receives prayers about love, luck, and protection from her faithful. Although the Catholic Church has condemned this belief, there are many people who practice this type of worship.

In private devotion, the Santa Muerte is prayed to through a magical ritual that distinguishes her powers according to the color of her cloak. The most venerated are the Green Death, prayed to for protection people in prison “for just or unjust reasons” and to get out of drug addiction; the Red Death, who is asked for sexual vigor and satisfaction in love; the Yellow Death, in charge of money and trade; and the Black Death, invoked to commit acts of blood or to be protected from them. 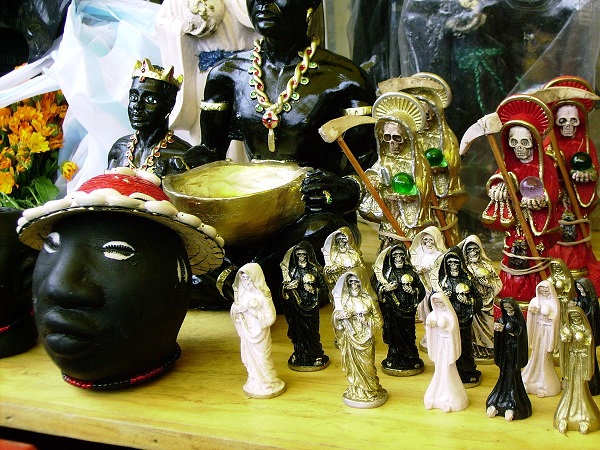 The Santa Muerte dressed in White is the most ecumenical, the one that alludes to renewal and spiritual rebirth. At its altar, flowers, candles, fans, cigars, and spirits are offered. Wealth Magnet Spell Casting is a typical money magnet spell. It manifests differently for everyone, but typically it works like a money magnet.

How to venerate Santa Muerte for money?

The veneration coexists quietly with that given to all the other saints.

This is not surprising; even if her image inspires certain fear (the classic skeletal face wrapped in a cloak, with the scythe in her hand and sometimes a scale and/or a terrestrial globe in her other hand), despite her sinister air her veneration has nothing to do with Satanism.

On the contrary, she is a benevolent spiritual presence, an angel of light endowed with extreme powers. Being firmly convinced that her protection is the most powerful of all, it would seem that the most devoted to her are criminals or, in any case, people who lead a dangerous life (and with this, she is very similar to the Argentine and Paraguayan San La Muerte).

In Mexico, there are many sanctuaries dedicated to Santa Muerte where people get together to pray to her and ask her for miracles.

Maybe you’ve seen pictures of Santa Muerte’s statues with offerings all around and you might be asking: can I pray to Santa Muerte on my own at home? Short answer: YES!

What can I ask Santa Muerte?

Basically everything! You can ask for things that cannot be traditionally asked of a normal Catholic saint or to any other kind of spirituality. As we all know, traditional beliefs don’t allow us to focus on materialism and other more mundane aspects of life. Santa Muerte, on the other hand, allows you to do so and won’t mind if you are looking for more money, for more sex in your life, and so on.

According to popular sayings, invoking her or devoting oneself to her without a valid reason would be considered an extremely dangerous act if carried out in a superficial and ephemeral way.

It is thought that the punishment for such a gesture, as well as for a promise made but not kept to her, would be death, not one’s own, but of a loved one.

It is also commonly believed (but not always shared by everyone) that this “saint” is extremely jealous; so many, to avoid her wrath, stop honoring other saints.

How to pray to Santa Muerte for money?

You can use a statue or a figure of the Santa Muerte. Keep in mind that you can rely on a figure with a yellow cape as it’s the color that, according to Santa Muerte’s traditions, attracts money, or you can simply choose a classical white cape Santa Muerte image.

Light up a green candle, spend a few moments relaxing and focusing on what you want to bring and attract into your life and open your heart to the blessings of Santa Muerte. If you want, you can offer some coins to the Santa Muerte or some golden jewelry. Do what feels best for you.

To have more luck with money

Also read:
A Powerful Prayer for the Lottery [5 Min Chant]

To protect your money

These prayers are in Spanish but you can chant them in English or in any other language. You can even create a custom prayer all by yourself. As long as it expresses your wishes clearly and you truly open your heart and soul to Santa Muerte, you are on the right path!

If Santa Muerte’s prayers for money are not your thing but you still want to attract money into your life, don’t forget that I can cast money spells for you! Check out my shop and see all my available options!