Rosemary is an evergreen shrub that belongs to the Labiate family. Let’s take a look at 5 Rosemary Magical Properties.

Originally from the regions of the Mediterranean basin. Up to two meters tall, it has prostrate or ascending stems, very branched, with small, linear, leathery, whitish leaves on the lower side. Small purplish-blue flowers, bloom together in axillary clusters in different periods of the year, depending on the climate. The whole plant is very aromatic.

Precisely because of its balsamic and stimulating properties that have resonance even from the energetic point of view, it is rightly considered effective in protection rituals, for the purification of environments, to avert evil and to bless the home, and work activities.

It is said that keeping a twig under the pillow ensures a night of good restful sleep.

Its infusion is also useful for washing hands because it drains energy and frees it from negative influences accumulated during divination or a pranotherapy treatment.

A Good Omen for Love

Being a perennial and evergreen plant, it is a good omen whenever you start a business or a relationship, whatever it is, and to ensure its long life.

It is used in spells to strengthen memory and to preserve youth. 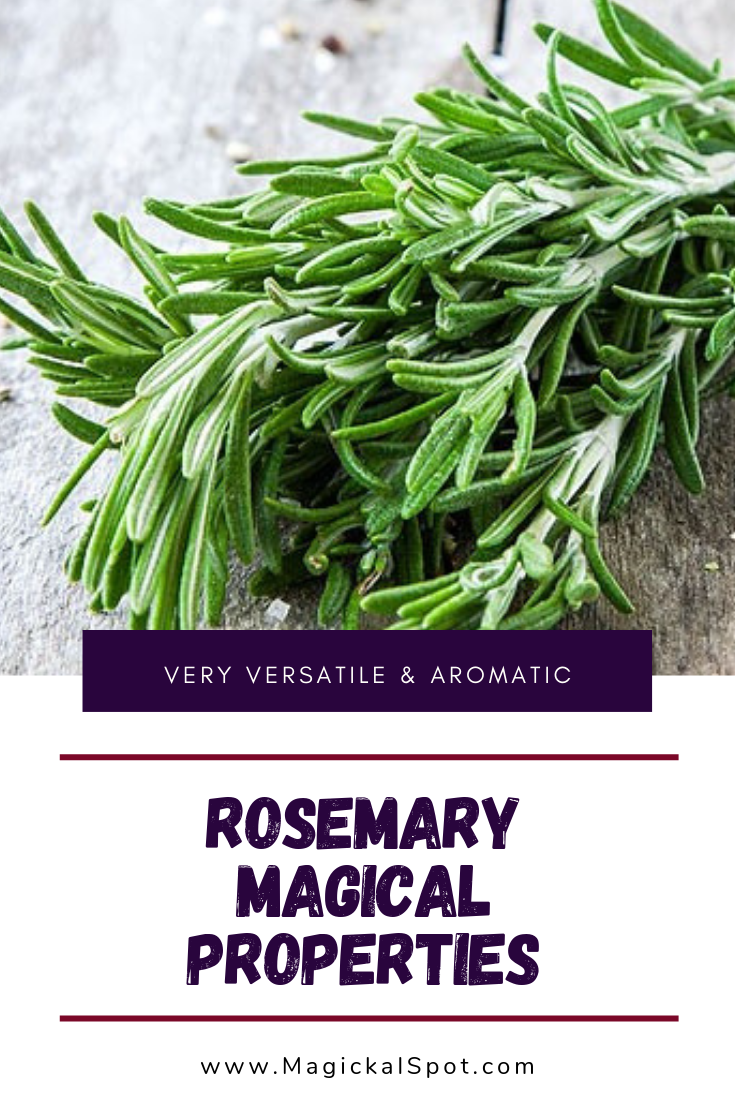 Speaking of youth, there is a legend about Isabella, Queen of Hungary, who lived between the 14th and 15th centuries.

It is said that she had her herbalist make a tonic based on rosemary and other herbs, which gave her a fresh and youthful appearance despite being over seventy years old.

Unfortunately, the authentic recipe was lost over the centuries, despite being renowned for its miraculous effectiveness.

Some say that the real power of this lotion should be attributed to rosemary flowers fermented in honey, while others think that all the credit goes to orange flowers.

For the ancient Romans, the scent of rosemary cheered the dead and accompanied them in the afterlife.

Still, in the nineteenth century, it was considered a “plant of remembrance.”

It was customary to bring rosemary sprigs, as well as daisies and sage to the funeral.

Given its ability to adapt to different climates and soils, its main characteristic is undoubtedly its versatility.

Traditionally, rosemary is considered one of the magic plants par excellence.

In many books of Green Magic and Sorcery, it is indicated as a suitable substitute for any missing ingredient.

In the book by Charles Leland “Gypsy Sorcery and Fortune Telling” a legend mentioned a small group of Witches, turned into cats, part in a boat for a long and adventurous expedition, for the sole purpose of reaching a distant land to find the precious rosemary!

A Great Plant to Create a Bond With

To do magic with herbs, it is not enough to buy them in herbal medicine and then follow the instructions of a book of rituals and spells.

We need to know the plant we want to work with, and possibly cultivate it, grasp its leaves and flowers in person and establish a relationship with it.

If you don’t have a small garden to grow rosemary, I suggest you keep it in a small a vase, in a place where it can enjoy the sunlight for most of the day.

Use it, both in home-made herbal medicine and in some spontaneous and straightforward protection and purification ritual.

It seems trivial, but the plants in the home are rarely looked at for what they really are: living beings that, like everything alive, like to interact with other living beings.

Some need others to survive, and the other way around. But a plant in the house is isolated from its natural environment, and aside from the daily watering, it tends to be forgotten, left to itself.

Plants, like all living beings, have an aura, and to perceive the etheric layer, that is, the outer one, is not difficult.

A useful practice to tune into the energy of rosemary (or any other plant or tree) is to approach it, touch it and try to perceive the life in it, its “personality,” its state of health. If you slowly draw put your hand closer to the plant, you should quickly notice a sort of density higher than the surrounding space.

Don’t force yourself to hear who knows what, to interpret. Just open up and listen, a few minutes every day.

Slowly you will learn to communicate with the plant and to establish a relationship of empathy with it.

Involve all your senses.

Admire the dark green of the leaves at the base, and the brighter one of those at the apex of the twigs.

Delicately touch its wrinkled leaves, taste its bitter taste with the tip of your tongue…

This will open the doors to a more acute awareness of the energies you work with when using herbs during a ritual or a spell.

It will make you feel like an essential part of the life that fills the Universe.

Hi there! As you already know, I'm a passionate practitioner of witchcraft, and I love every single piece of it!
You can read more about me Here.
Much Love and Many Blessings,
Tina Caro