In general, we know that witchcraft is about tradition and beliefs. We find different approaches to the rat and its meaning in each culture. The rat’s symbolism varies substantially from one continent to another.

For Asians, it is an emblematic sign related to good luck. For Europeans it symbolizes the opposite, that is, a bad omen. In some areas of Japan, it is associated with deities, relating to wealth and entertainment, and the rat is a symbol of success, personal and social achievement.

In other parts of the Far East, the rat is valued in one way, since the absence of this animal is considered an alarming and worrying sign of bad things to come.

Some eastern symbolists interpret the fact that rats dig into the ground as an act of symbolic content and, in this sense, the rat would be an emblematic sign related to moderation and integrity. 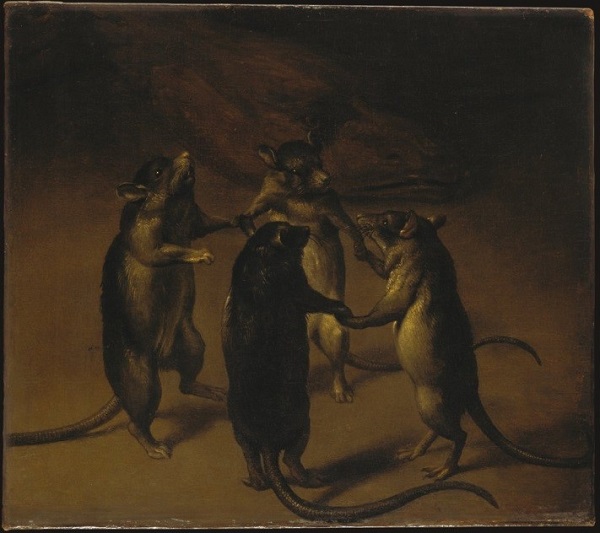 Many European people consider staying in certain places, that rats themselves have just abandoned, such as homes, houses, and boats, as a great sign.

During the Middle Ages, it was believed that the rat was an incarnation of the devil, summoned by magicians or witches and the propagation of this species was considered a plague that the divinity had sent as punishment.

For the people of the Indus Valley, the rat being present was part of myths and legends related to the riding of the divinities and, in this case, it is said that Ganesha, the god of fate and wisdom, who is represented with the head of an elephant, rides on a rat, which was a demon that he had defeated and condemned to that form.

For the Greeks, the rat is an animal with characteristics like other animals of dark descent and that live underground or in inaccessible places, such as the mole and the snake.

Among some African tribes, the rat is regarded as a taboo animal and is used for the practice of trickery and divination.

In some areas of northern Europe, the rat acquires magical characteristics and even serves as an amulet.

Are you curious to know the spiritual meaning of an animal, in particular the rat?

Firstly, it must be taken into account, that the symbolism of the rat is closely related to an endless number of practices, and if we take a common message from them all, we will speak of success in both the professional and personal field.

However, the spiritual meaning of the rat goes beyond what we imagine. Containment, determination, and serenity walk behind it. It is an animal that, contrary to popular belief, has nothing to do with clumsiness. This is something that many cultures over time, have been able to identify, treating it as a symbol of good luck, innocence, and even fertility.

Therefore, the rat’s spiritual interpretation can vary in different parts of the world. But the spiritual meaning of it has some aspects in common that we are going to talk about next. Keep reading to find out.

I have rats attack my home. Is it a sign of black magic?

Of course, it could depend on your culture and how you feel about this creature. If you feel a sense of negativity spreading throughout your house, if you are scared of them and you feel there is something wrong with its presence, it could possibly be that someone has cast a black magic spell or a curse on you.

That’s because bugs and animals like snakes or rats are often considered as a bad sign to many witches. But I would advise that you trust your intuition on this.

What if I am a witch and I dream of a rat?

Having dreams is normal. We always dream, although we often don’t remember them. Sometimes we might have repetitive dreams, this is not by chance, but there is a reason behind it. The meaning of dreams can help us decipher our interior, how our minds and emotions are.

Therefore, the interpretation of dreams is a great ally in getting to know our interior a little better, especially when dealing with magic. The types of dreams can be vastly different since they can be carried out by us, by strangers, or even by animals, such as rats.

But what does it mean to dream of rats?

One of the most common dreams is those starring rats. This animal has been associated with darkness for centuries, in fact, ancient mythology considered rats as one of the symbols of the night.

They are also associated with the destruction of crops, being pests, and the spread of diseases. Hence rats represent filth, disease, and death in many societies.

This has led to an increase in superstition around this animal in some countries, such as England because if a rat chews on the furniture, it means an omen of death. However, this does not mean that the meaning of rat dreams is deadly. Different interpretations of rats will vary depending on the type of rat that appears and their actions.

If you have dreams in which rats appear there are several possible meanings:

When a rat appears in a dream it means that we are hiding something important, and doubts, guilt, and envy build up inside us.

Since rats are associated with repulsion, disgust, and rejection, when we dream of a rat it means that someone around us disgusts us after an unfair and harmful action.

Maybe as a witch you are working with negative energy and you are too driven by resentment to let the universe help you create your vision and accomplish your witchy goals.

Can you Play a Ouija Board Alone? [My Story Included]
Next Post: Seeing Shadows Spiritual Meaning Explained [Good vs Bad]