Easy to find and fantastic to use, nutmeg is something that should not be missing on a witch’s shelf! Let’s learn more about Nutmeg Magical Properties and why it is so good for our craft!

Originally from Indonesia, nutmeg is a perennial plant whose fruit produces a hard grain covered with a membrane. 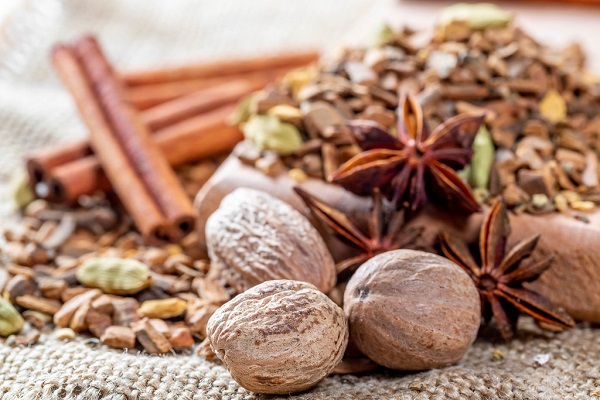 This grain is the spice we use so much in the kitchen, which is enough to scratch and add to any dish to give it a subtle and enjoyable taste.

However, the most crucial part of it are its various health benefits.

The name nutmeg is of medieval origin, dating back to when not knowing the background of the spice it was commonly called walnut with the scent of musk.

The first mention on the plant dates back, to the first century when Pliny the Elder in his writings spoke of a tree that had two distinct aromas – hot and spicy aroma and aroma that’s similar to a mix of cinnamon and pepper.

Although it was widespread in Arab markets for centuries, it became more popular in the sixteenth century, becoming one of the most sought-after spices in Europe.

In fact, so much so that it was the subject of bitter hostility among Western countries, which tried to win the trading monopoly.

Esoteric and Magical Uses of Nutmeg

Ruled by the planet Jupiter and the Fire element, nutmeg was considered to provide money, health, loyalty, and, therefore, has been widely used in good luck and health spells.

For Good Luck (mainly if you’re searching for a job)

Add all ingredients to the water and boil it. Boil for 20 minutes on low heat.

Bathe with this preparation before an important appointment such as a job interview.

Check a list of other get a job spells.

If you want to attract prosperity to your home, grated nutmeg and a good amount of ginger should be placed inside an empty beer bottle.

Also, before leaving home, you can make a dip bath, to which you should add a little grated nutmeg.

You must grate a whole nutmeg and then store it in a yellow bag which you must carry with you every time you place a bet or buy a lottery ticket.

If you are playing a lottery, you must write down the number on a piece of paper and then place it inside the same bag. It would be best if you did not separate from this bag when you sleep.

To Attract a Man

If you want to attract a man, you can also use nutmeg together with two tablespoons of almond oil and the petals of three red roses.

The rose petals must be squeezed in a vessel containing 1 liter of water.

Then add the almond oil and ground nutmeg, boil for 15 minutes, remove from heat, and let it cool down. Bathe with this preparation just before meeting the man you want to attract.

To make rheumatism (especially in the hands and feet) more bearable, do the following procedure.

With a ground nutmeg, seven cloves, a white bar of soap (natural, no smell), three cups of orange blossom water, two tablespoons of brown sugar, the juice of a lemon, and two egg whites.

Grate the white soap and place it inside a pot.

Then put the rest of the ingredients in a pot.

Mix everything and wash the body with that mixture (focus on your hands and feet) early in the morning.