The spiritual meaning of the frog is very broad since it is an animal that is full of lessons for those who own it. So let’s learn more about the meaning of a frog in different areas of our lives, dream interpretation, and more.

On one hand, it teaches you how to adapt well to changes, to see them with a certain humor, even those that seem negative. When a change comes into your life, it’s not without a reason: a new cycle begins because of the end of an old cycle.

On the other hand, its song brings rain and cleans the earth, feeds it and creates life. That is what this animal does in our lives too: it cleanses our body and soul, frees us from all negative feelings that we no longer need, makes us stronger, and purer.

In addition, it also teaches us to be more creative and to face life’s obstacles and changes with joy and optimism.

Just as it changes with what it attracts, the water, it teaches you to transform and improve with what you have at your fingertips. Sometimes external events are not needed for you to change, but only you own will.

Also, it has been a symbol of fertility for many years because of the ability to lay large amounts of eggs. So if you and your partner have trouble conceiving, a good idea is to invoke the frog totem. 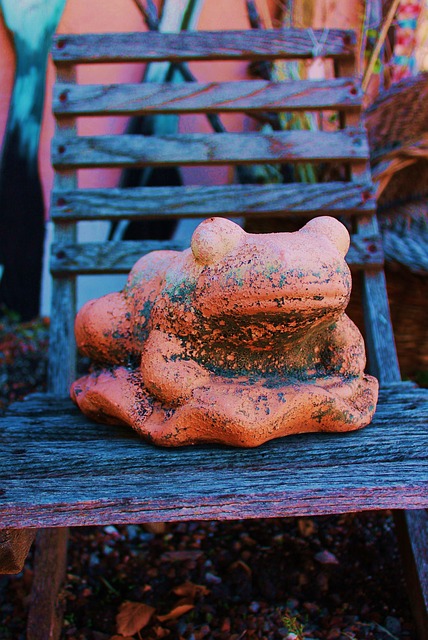 Because of all these positive meanings, it is recognized worldwide as a symbol of good luck. So it is common to find amulets of frogs in various parts of the world.

For the ancient Egyptians, the goddess Heket had the head of this animal and was the patroness of parts, prosperity, and abundance. Recognizable as the benevolent goddess.

In China it is a lucky charm, so the connection between the living and the dead returns once again.

In Japan “kero” also means “return” which makes it the perfect amulet for travelers. And apparently, a small jade frog in your wallet ensures abundance and protects you against theft.

The Cajun believed that the werewolves (loup-garous) were terrified of these small animals, so it was perfect protection!

In ancient Rome they were sacred to Aphrodite, so the connection with beauty returns once again.

Finally, for the ancient Christians, it was originally a symbol of the Holy Trinity, because of its three metamorphosis stages. As time passed, it was believed that they were familiar with witches, therefore pure malignant.

Meaning of Frogs in Witchcraft

Frogs have been contemplated as an indispensable object of witchcraft.

They were used for the preparation of potions and were seen as a companion of witches.

The glands of the frogs’ bodies secrete a thick, white poison, which serves as a natural defense weapon to repel attacks by the enemies. This poison, called bufotenine, is also commonly referred to as “toad milk”, and is a hallucinogen. This poison has an unpleasant taste and can also kill a man.

Since the time of Zarathustra, who lived around 600 BC, toads were associated with multiple manifestations of evil. In the Middle Ages, it was thought that toads were evil. The people believed that witches could turn into toads.

They were the fellows to the witches at the house of demons, who asked to be served by them. The witches presumably used toads, for poisoning or crippling their enemies. In many magic potions, they are an important ingredient.

According to a legend, witches were beheading them, stripping their skin and combined with other strange ingredients lacing them on a plate.

An ointment that is produced with the saliva of the toad, was the potion that made the witches invisible.

In popular magic, the ashes of burnt frogs mixed with brandy are an effective antidote against drunkenness.

Toads have been used as amulets in necromancy and black magic. It was believed that toads are jewels; the stone toad can be used to acquire poison, the stone is heated near the poison.

Particularly effective was considered a ring with the amulet stone in the shape of a toad.

In the Middle Ages, it was believed that during the gatherings for worshiping the devil, the participants mutilated and cut the toads into pieces. The impure witches, beating their feet, sending the toads to hell.

Some modern witches believed that toads are excellent companions, due to the fact that these creatures are easily manageable and they can easily take care of them. Furthermore, toads transmit their mental properties. It is said that witches are able to suck toad milk without harming it.

We can sum up by saying that the elements and meanings associated with frogs are: luck, purity, rebirth, renewal, fertility, leadership, transition, dream or dream world, opportunity, intermediation, and metamorphosis process.

Since it passes through a great deal of transformation, from egg to a frog, living between water and land for all that time, the obvious symbol for them is metamorphosis, adaptability, transition, and transformation.

In a nutshell, it is a lucky charm for all those moments in life where a great change is experienced or needed. Just like adolescence, the transition to adulthood, a move from your house, from your country, a career change, or any other significant change! So if there is a change there is an opportunity, and frogs come as good intermediaries.

To continue with the dual aspect of this slimy animal and its intermediary abilities, we come to shamans: for them, it is a guiding spirit, able to guide the shaman from this ordinary world into other extraordinary worlds, the world above, the world below, the world of dreams, and many more.

And consequently, it is soon made a parallel with the world of the dead, with its ability to communicate with them, but also with our most private dream world, our most hidden power and beauty.

All these connections and communication skills make frogs great for languages, translations, connections, social opportunities (especially if they are represented with the outside language), for knowledge in general (and in a nice closure of circle it brings us back to the shamans, etc.).

Their connection with water also leads to another affinity: to purification, healing, and rites of passage such as birth, death, and rebirth. Together, birth and water mean creativity, prosperity, and abundance.

Frog in My House Meaning

It is said that when a frog crosses our path or gets in our house it brings the ideal opportunity for a transition. Just like humans, it goes through numerous changes during its vital phases.

Adolescents can be best identified with this animal. That is because just like the frog, adolescents go through a transition process from youth to adulthood.

For many cultures, it is a symbol of fertility: a fact that may not seem surprising at all, given that many animals are associated with fertility, but in the case of the frog this relationship is much more prominent.

Because of the large number of eggs that it can lay, in many cultures, it has always been seen not only as a fertile animal but also as a symbol of abundance.

A dead frog could mean that we are not yet ready to evolve and transform and it could also be a wake-up call to start exploring our intentions, plans, and wishes. Maybe they are not what’s best for us at this moment and we need to take some time to think about it and set some brand new and fresh plans back again.

Often those who dream of green frogs have a tendency to use sarcasm in a desecrating way in interpersonal relationships. So if you have been insensitive and contemptuous of someone who did not deserve it, the unconscious guilt might turn you into a small and insignificant frog in your dreams.

It represents the psychic, affective and spiritual evolution that every human beings undergo in their life. It is a slow and difficult process like the one that it performs in its many metamorphoses: egg, tadpole, batrachian and finally full-grown frog!

It can teach you to jump quickly from one level of consciousness to another. It can also help to find the courage to accept new ideas and move towards changes, teaching you to flow through your existence.

It is, therefore, a symbol of evolution, luck, and change. As it’s also associated with the symbol of fertility, it indicates a change that leads to success.

As mentioned before, when trying to focus the attention on the background in the dream, there is also a need to observe the emotions provoked in the dreamer, since it is generally auspicious … even seeing it in real life.

What does it mean when a frog jumps on you?

Even if it might seem like a scary experience, there is nothing to worry about! On the contrary, if a frog jumps on you it’s a very good sign! It means that a change you were hoping for is just around the corner or that a transformation is coming.

It can even mean that if you are planning on making a massive change in your life, this is the right moment to do it, as the energy and the stars are in your favor!

A frog is all about transformation and change, so when it jumps on you it is like it’s sending a bit of its energy and its own magickal features on you too. After something like that happens to you, try to think about what are the things you would like to change, and if there is any occasion that dares you to get it, go for it!

The power of changing your life is within you and it’s stronger than ever and ready to make it! If two frogs jump on you, it’s even better! Maybe the change is linked to a relationship you would like to change, or it means that a special collaboration would be the perfect way to go to accomplish what you want in your life.

Spiritual Meaning of frog in a Dream

When you try to interpret the meaning of a dream where the frog is the protagonist, it’s very important to focus your attention on the background in the dream i.e. the environment surrounding the animal. If it’s near a river or a road, it presents a test for the psychological coherence of the dreamer and what the frog represents in his or her world.

Is it a lucky charm, does it arouse feelings of indifference or disgust? Sometimes, when we fight with a person whom we deeply appreciate, we might see that person disguised as a frog in our dreams that night.

Dreaming of a small animal indicates an overestimation of one’s abilities, with a tendency to see others tiny and inferior.

Hi there! As you already know, I'm a passionate practitioner of witchcraft, and I love every single piece of it!
You can read more about me Here.
Much Love and Many Blessings,
Tina Caro