Is there a couple you want to separate? Would you like to know a way to push this to happen? In this article, I’ll show you How to Break a Couple Using Voodoo.

Breaking up a couple using voodoo is a great option for those who, like me, are into magic and want to create their own dream life. If performed well, a voodoo breakup up ritual has almost immediate effect, say in a few weeks.

If almost two months have passed since the end of the ritual, you should already see clear and unequivocal effects. One of the most common effects of the esoteric rite of estrangement (and obviously it depends on how it is done) but the couple in question should be experiencing the inability to be in the same environment as the other person.

When asked, they will likely be unable to give an explanation. it is a sensation that the person (of the rite) experiences and which he himself is surprised. And then, in general, the event that leads to the separation of the couple that the ritual ‘wants’ to remove the connection with that other individual takes place.

In general, the ritual for separating works well when there are the basic assumptions that the couple is not beneficial to each other. Yep… Voodoo magic can be very powerful if done correctly!

Casting your own magic spells takes skill and patience and isn’t recommended to do it alone in most cases. I provide these “do it yourself” articles for educational purposes, but it is strongly recommended that you consult an experienced spell caster such as myself and allow me to do the work for you.

I can cast a powerful Black Magic Money spell in less than 24h.

This is a Custom Black Magic Spell Casting, which is a premium spell casting that requires higher quality materials and it also manifests sooner than other spells.

How I used voodoo to break a couple?

I will admit I used voodoo once to break a couple when back in the day my father dated a woman that I didn’t like at all. I perceived her to be like an energetic vampire. When my father was with her he wasn’t like himself at all. He was always weak, angry and a different person from the one I knew.

I felt that the union wasn’t quite right, and their relationship was having repercussions on the whole family. She was the kind of woman that was jealous of her partner’s children. Basically, it was a hot mess and a very negative dark time for my family. So, I decided to give this ancient easy ritual a try.

Here’s the ritual I cast

The ritual that I propose works very well even using only personal energies.

The only recommendation is, as always, to commit to yourself in this ritual and gather all your anger and bad energy towards these two people.

These kinds of rites should be done in a waning moon period.

Take advantage of the energies of the night to perform this ritual by remembering that esoteric practice (then there are many distinctions and currents of thought also on this theme) believes that the night hours start from 10 pm and arrive until dawn usually between 4 and 5 in the morning.

To perform this voodoo break up ritual you just need these ingredients: 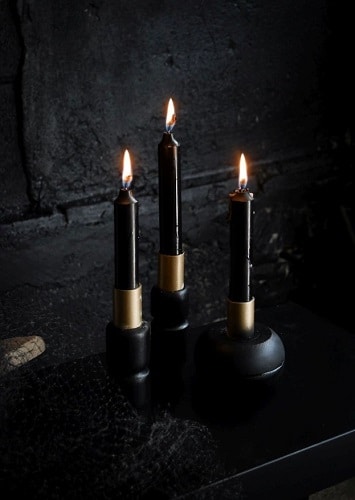 Using the pen, write on the back of the pic, surname, and date of birth of the people you wish to break.

It may happen that maybe you do not have some of that information of the people you want to divide – in this case do not worry, mark on the paper what you know (pseudonyms and epithets are also allowed in magic) as long as you are able to clearly visualize them in your mind, that what’s more important.

Put the needles and the pins in a circle around the couple on the photo. This is creating a cage around them. And then, with the intent of separation in your mind’s eye and your heart and soul…. I want you to place a line – or boundary – between the couple visualizing their separation physically using the pins to create a block.

Now light the black candle and hold it in your hand until the wax begins to melt. Again, with the intention of separation and clear and certain energy’s breaking all connections.

At this point… tilt the candle and slowly drop the wax on the photo so it covers the whole area of the circle of pins and therefore its contents.

As you do this, you must imagine these two people breaking up, arguing, and dividing. Separation and parting. See them being unable to stand each other in the same environment. See them separating household if they live together.

Visualize one of them leaving, walking away, going out a door, and shutting it. Connections they may have had breaking like chains. Try to concentrate all the energy possible.

After you have finished covering the whole circle with wax, take the photo and place it in a fireproof bowl, blow on the candle to extinguish it, and say the following words:

“So I transferred my will,
My spell has been heard.
So I want, so be it! “

Once the photo is in the bowl, take a match and set the picture on fire (always pay attention when using fire). It is a good idea to have some water nearby. Once the photo is burned, take it outside and leave the ashes to the air – setting your intentions and asking the Gods or Fates to take it with them and throw the needles/pins away.

Light the candle again and let it finish burning while you visualize the couple finally apart with the awareness that this will come true.

I’ve prepared a much longer article about the break-up spells here.

At the ending of my story, my father broke up with her after one month. I used voodoo on them. I must admit I added a little bit of the daily visualization to keep things going and to keep the message I wanted to send to the energy and the universe loud and clear.

It was amazing to finally see my father getting back to normal, recovering our relationship, and finally feeling some good energy around the house!

If you want to break up a couple using voodoo but you are not into voodoo dolls or complex procedures, especially if you are new to magic, this easy ritual is definitely one to give a try!

How Long Does it Take Sugar Jar Spell to Work? [Spell Included]
Next Post: Here’s How to Cast a Protection Spell on Someone [Potent Magic]

Last Full Moon in 2022 is Almost Here! Read More About it : here Also Don't Forget to Use Code Moon15 at checkout! Dismiss