“The black cat brings bad luck!” Everyone has heard this phrase at least once.

Superstition? Ancient belief? Does it really bring bad luck? But, above all, have you ever asked those who believe in it if they know the origin of this superstition?

Few are truly informed people, so let’s try to shed some light on this beautiful creature, its history, and how we can deal with it properly!

We can begin by saying that a cat, due to its personality, has always been the subject of legends and superstitions, sometimes positive, others with quite disturbing implications, such as in the case of the black cat.

It was in the Middle Ages that man became an enemy of this cat, as he considered it a diabolical animal, the incarnation of witches, and the symbol of evil. The superstition of the black cat still exists in many countries; in Italy, Spain, and the United States, it is believed that it brings bad luck; while in other countries, like Japan, Scotland, and England, the black cat is a symbol of luck and having it at home means prosperity. 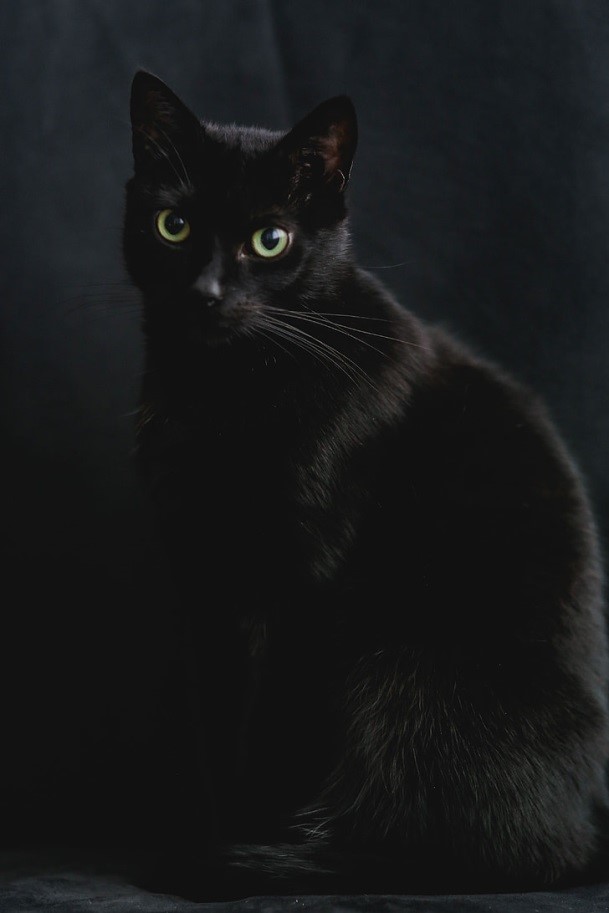 There are numerous myths, legends, and superstitions related to cats. There are people who think it is an animal that brings good luck, that arouses charm and unconditional love, and on the contrary, there are those who argue that this animal brings bad luck and arouses suspicion and distrust, depending on the case.

But despite the cats’ long history, they managed to survive and not become extinct; unfortunately, this is not the case for the superstitions that concern them.

The adoration of cats in Ancient Egypt

It is known that the Ancient Egyptians held this animal in great esteem, so much so that they chose it to embody Bastet, an ancient deity of Egyptian mythology depicted with the body of a woman and the head of a cat. Originally, Bastet was a lioness. Sekhmet, Bastet’s sister, is also depicted with the anatomical parts of a cat.

The cat shared fertility and clairvoyance with Bastet and foresight with Sekhmet. Sekhmet, who represented justice and power in war, was questioned by priests to learn the enemy’s plans and thus help soldiers in battle.

Cats were sacred animals to the point that, if one was killed, the person responsible had to be punished by law. In the event of a fire or any emergency that required the evacuation of a house, the cat had to be rescued before any other member of the family and objects that were in the house. When a cat died, a period of mourning began for those related to him and they had to shave their eyebrows.

From Egypt, the symbolic charm of the cat passed to Greece and ancient Rome, where it was considered a companion of the hunting goddess Diana. The black ones especially were thought to be endowed with magical gifts. I want you to focus on this particular consideration of cats and make it your own, respecting this animal and its story!

Superstitions about cats have always spread all over the world, beliefs that, for the most part, are without foundation. In short, there are really many superstitions about these animals and over time they have been generating different versions, depending on the culture of the country they come from.

To name a few examples:

Even our country is no exception in terms of beliefs about the black cat; for example, many think that “seeing the feline yawn means a storm wants to break out”; a cat that sneezes is a good omen for those who have heard it; hearing meows on Fridays, especially at night, heralds a fight; a black cat that crosses the road brings bad luck; and many, many more.

Not to mention the superstitions regarding the behavior of cats with respect to different weather phenomena: if the cat washes behind its ears, spends a lot of time lying on its back, or stares out the window, it will rain; if he runs around the house like crazy and scratches curtains and cushions, a strong wind will come; if he sleeps with his paws folded under his body, cold will come; if he is sitting with his back to the fire, there will be a snowstorm, etc.

Where does the black cat bring good luck?

Legends and superstitions about the black cat bringing bad luck, however, are not experienced in the same way all over the world!

The night and the mystical power of black cats

Therefore, the origin of the cult of power attributed to black cats is to be found in ancient Egypt. But the cat was also close to another cult, that of the goddess Isis (Artemis for the Greeks and Diana for the Romans), who was the goddess of the night, whose color was precisely black.

The night has always been a phase of mystery and fear for humanity, but it has also exercised a magical seduction.

It is the moment in which we are not alert, we cannot defend ourselves, we become the prey of dreams and imagination and, therefore, victims of dark and mysterious powers. Hence the charm of the black cat, who watches without being seen, is the animal most dear to the nocturnal deities and their favorite representative on Earth.

A black cat in the night is almost invisible, but if its eyes meet a light, they shine in an eerie way.

Black cats as familiars and black cats in witchcraft

The story is full of legends and episodes that confirm the strong symbolic power of the black cat. In the past, it was believed that these beings came from a dark realm to our space-time dimension, which the witches called the fairy realm.

Black cats are familiars who typically come to help people in need or who suffer from a lack of something. The black cat familiar generally offers knowledge about the use of herbs or the ability to use spells. In order to take advantage of this gift, the witch had to take care of the familiar, until the moment of its transcendence.

Their ability to sense natural calamities or to see immaterial natural “presences” and the dilation of their pupils put them in relation to the Moon, a cosmic body sacred to witches, precisely because they were attracted by the sight of it.

In the ancient tradition of witchcraft, witches took cats with them to the Sabbat, from their behavior they drew auspices and predictions, while their fur was used as a magical ingredient for a very powerful spell (the passage of silence). It was said that by using the fur of a familiar black cat on food or on some libations, whoever had the misfortune to run into such a spell would become dumb or mad. In order to get in touch with this wonderful familiar, you need to do a lot of meditation, either visualizing or astral.

He will guide you and will have a lot to teach you. If you look him in the eye and go to him with an open heart, the black cat can become your portal to your true essence, your most faithful ally. Only when he sees you are deserving of his trust will he be able to show you the wonders that hide among the stars, the portals to other dimensions, and the magical existence that humans have long forgotten.

I don’t think we, as witches, should consider black cats as negative vessels of bad luck. On the contrary! This mysterious and fascinating creature can be a wonderful animal to get in touch with to create a strong connection with his senses and his intuition and create powerful bonds useful to our craft and our life.

A black cat can become a loyal friend and a protector, a wonderful ally against bad forces and negative energies as he senses this kind of energy right away, and I don’t think this is something bad, not all!

On the contrary, I think it’s amazing and cats, albeit in their own way, know how to give a lot of affection and company, it is impossible to be bored with them. Furthermore, there are numerous studies that have shown how coexistence with cats is beneficial for both physical and mental health of people. And whoever has a cat at home can see this for themselves.

A cat, regardless of the color of its coat, does not bring bad luck; therefore, it makes no sense to delegate the course of events in our lives, whether they are lucky or not, to the sight or behavior of a cat.

Finally, it is important to know that, for example, the Italian Association for the Defense of Animals and the Environment (AIDAA) has set up Black Cat Day—an event that occurs every year on November 17th, as in Italy the 17th is linked to bad luck and superstitions—whose purpose is to rehabilitate the reputation of these cats. It is a world day that intends to counteract the superstition towards these sweet, fascinating creatures.