The mighty and greatly revered oak tree has been an ancient symbol of the sacred since the times of the Greeks, Romans, and the Celts. Let’s learn more about oak tree symbolism, spiritual meaning, and uses.

It’s standout characteristics lend its symbolism to strength, longevity, and elevating spiritually as well as materially. It carries distinct leaves, since the tree’s edges are wavy, which shed from the tree in fall time going into the winter.

This tree is abundant in oceanic climates, found inside lush forests, but is a tree found in the Mediterranean climate zones as well.

It is large, baring a wide trunk and reaching more than 35 meters in height. Ents, or “shepherd trees”, recalled by Tolkien are old oak trees. And since the oak is so powerful, it’s able to withstand severe weather: lightning, extreme cold, torrential rain, hail, and more.

In modern and old days alike, the oak has been a highly prized tree due to its unique wood which ages beautifully. This wood is used for furniture, and since the oak’s wood carries a distinct taste, it’s the preferred wood for wine barrels. The oak is an extremely durable wood, used for boats and homes. Its bark contains tannins, which are tanning properties used to tan skins.

Strength and power may be the most notable symbols of this mighty tree, but such a powerful tree is determined to carry more powerful meanings with it. The energy of it is said to be one of freedom.

The energy is healing, helping those who believe to recover their strength and health.

Here are some more the oak tree’s awesome symbolisms:

Its energy is considered masculine because it represents the supreme strength of nature.

Beyond the above, the oak is the sacred tree for:

The oak tree is the God of heaven, rain, and thunder.

The famed Greek God, Zeus, received prophecy through the whisper of the wind between the leaves of the sacred oaks.

A tree of strength and freedom, in Guernica the oak stands in the main square to symbolize the freedom of the Basque people.

In Guernica, when lawmakers take the office they swear their position by taking the oak as their witness.

The question of “where did we come from?” has been intriguing man since ancient times, where creation myths were the tool used to explain.

The Arcadians believed that before they had manifested as human beings that they were oak tree.

The Hellenes called them their “first mothers”.

This makes sense in the regard of folklore because according to Greek mythology, the oaks were the first trees. Legend has it in many countries, that the first food consumed by humans were its acorns.

The oak is closely linked to power. In many cultures, important figures would make their decisions under this tree.

In magic traditions, the wood from the oak is commonly used in the production of wands. The tree’s knots, known as “snake eggs”, were used to prepare spells.

The oak has many virtues. The acorns from the oak were gathered during the night of St. John to use in fertility rituals.

Listening to its rustling leaves communicates divine messages, carried by the wind as its messenger. Burning the oak leaves is a way to purify the environment.

Because of these magical properties, the oak tree is respected and used in rituals of protection, strength, success, fertility, and stability.

In a person, the oak is representative of someone quiet, determined, and strong. Of someone who fears change and loves familiarity.

Tree symbolism is ancient religions played a substantial role. Some trees were associated with gods in Nordic, Celtic, Slavic, Greek, and Roman myth. Of course, different trees mean different things to each mythology.

The oak is anthropogenic, meaning that it’s found at the root of many creation stories of ancient traditions. The Greeks viewed the oak as being their birth mothers. This is “tree of life” is closely related to the image of the tree as a regenerating element.

In classic mythology, the ancient Greeks associated the oak with Zeus, and under the oak’s branches is where the music of Orpheus was played. Zeus was known to communicate through thunder or the oak itself.

In ancient Rome, the oak tree was symbolic of Jupiter, which spoke to people through the gentle waving of its leaves. The messages were transmitted through people who were able to translate, known as oracle guardians. Found in the Dodona oak is one of the most important natural sanctuaries dedicated to Jupiter.

The oak is also a sign of regeneration because of the confrontation between Zeus and Hera, which devastated the land with a torrential downpour. The oak was the first thing to sprout from this ravaged land.

In both Germanic mythology, the oak was associated with Thunar. They believed that the Gods lived inside of the trees. During the Christian crusades, the trees were chopped down because of these beliefs.

In Norse mythology, the oak tree is a symbol for Thor, the God of thunder.

There was a belief held by the Celts that the landscape was full of spirits. The spirits of the oak were associated with fertility and considered centers of wisdom.

The Celts would gather underneath the mighty oak to discuss a wide range of topics, it was a meeting of the minds. The oak is the tree where the Druids picked up the mistletoe, which to this day is used as a superstitious object in many cultures.

In Slavic and Baltic mythology the oak tree is associated with Perun, the thunder god. In Slavic myth, the oak represents the world and it’s deep roots to its crown, which is where Perun resides.

In other European ‘lore, the oak is seen as a solar tree. In Latvia, the oak is associated with Perkun, who is also the god of lightning and thunder. The tree is considered to them to be a golden tree. 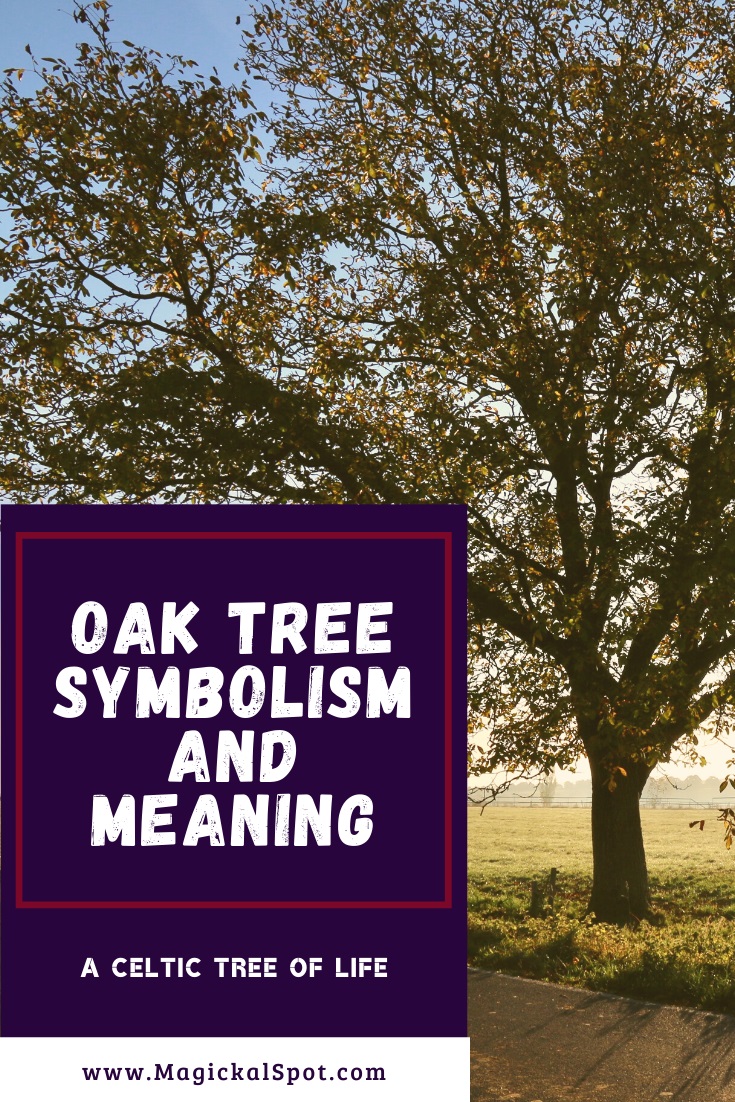 The oak is the undisputed symbol of strength, protection, durability, courage, truth, life itself, the human body, and fertility. Even the fruit of the tree, the acorn, is seen as a symbol of life, fruitfulness, immortality, and to the Nordics is sacred for Thor.

The Celts and the Veneration of Nature

The ancient Celts who are still shrouded in much mystery were known to have a close relationship with nature. It was venerated and respected as a source of sustenance, life, and peace. Similar to the Native American Indians, the ancient Celts did not build any temples or places to worship, rather it was in nature where worship of the divine took place.

To these cultures, streams, valleys, lakes, ponds, and springs were all considered to be magical sites where God’s could be contacted and rituals could be performed.

Because of the Celt’s close relationship with the land and attunement to nature, the culture documented many beliefs about trees in particular.

One of the more central trees to the Celts, and found across cultures and religions, is the tree of life. The tree of life is an archetype that represents the entire universe, life as a whole, the knowledge and the connection between man and God’s.

While the image is similar in many traditions, representing the flow of life, also has some differences as well. But the similarities outweigh the differences. They are all seen with strong roots, largely and firmly planted into the earth. The tree’s branches extend into the sky, barring rich fruits (a symbol of physical and spiritual nourishment), and the leaves have properties of healing.

The Oak, the Celtic Tree of Life

The oak tree is majestic in its sight and presence, but the tree also has profound meaning. The fruits of the oak can feed men and animals alike. Its size allows for it to take up a lot of space in the forest, its long life painting a source of wisdom. The oak’s leaves can be used for a cure in a wide range of diseases and disorders.

For these reasons and more, the Celtic tree of life is almost always represented by large oaks with long and complicated weaves.

The Celtic tree of life is a metaphor explaining the journey of every person’s life. The roots represent the wildest parts of oneself, the “shadows”, which through growth and maturity can be modified.

The trunk of the tree and its branches are the paths taken by each person in life. If a path is considered to be a “wrong road”, this is represented by broken and gnarly branches, which through making better decisions can be corrected.

In their traditions, to mature spirituality meant overcoming obstacles and correcting mistakes. This is also a reason for the tree of life, and the oak, being a strong symbol of rebirth and change.

The Tree of Life Today

The archetype of the tree of life is still very common today. The tree of life can be seen worn on pendants, depicting a deep symbolic meaning that still holds up even today.

The tree of life is often an object worn or given as a gift, to represent a profound change in a person’s life: new home, career, relationship, etc.

A man represented by the tree of life can be said to have his roots planted firmly, not wanting to forget his traditions and origins.

The past and his relationships are important to him. Despite this, he handles change well and lives a rich and full life, similar to the great oak tree.